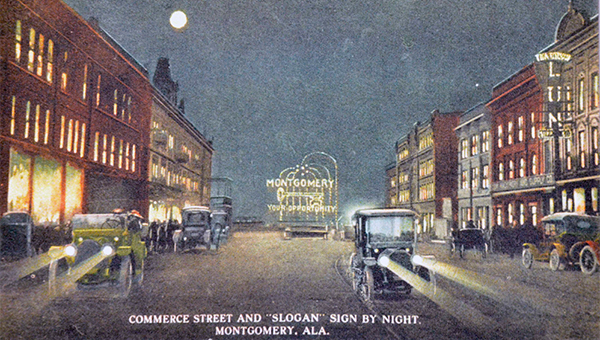 Historic postcards on display in the exibit include images from Montgomery and Eufaula, among others. Wade Hall’s extensive collection is on display now at the Troy University Library.

Anyone who knew the late Wade Hall of Bullock County would know that for, him, collecting vintage postcards would be a quaint thing to do.

Hall was a teacher, writer, poet, critic, interviewer, folklorist and documentarian and last but not least, a deltiologist or postcard collector.

Hall collected more than 10,000 postcards from “pillar to post” as he would say. He gave his extensive collection to the Troy University Archives and the University of Alabama Libraries.

About 400 of Hall’s postcards are featured in book form in “Greetings from Alabama: A Pictorial History in Vintage Postcards.”  The cards feature scenes from every corner of the Alabama — the state that he physically left behind for almost 50 years but always kept close to his heart.

Now, many of the postcards featured in “Greetings” are part of “Wade Hall Postcards: Historical Scenes of Alabama, a traveling exhibition that was a collaborative project between the Troy University Libraries and the Troy University Department of Art and Design.

Dr. Martin Olliff, association professor of history and director of the Wiregrass Archives at Troy University Dothan Campus, was the projects humanities scholar.

“Wade would be very pleased to know that his postcard collection is being circulated throughout Alabama,” said Hall’s longtime friend, Gregg Swem. “He lived away for nearly 50 years but Alabama was his home and his plan was always to come home.”

Hall did come home to Union Springs after retiring from a long and storied career as a beloved English teacher at Bellarmine University in Louisville, Kentucky. Back home, he authored “Conecuh People,” an autobiography of sorts. “Conecuh People” was later made into a play that is the hallmark of the Red Door Theater in Union Springs.

Hall’s legacy and his love of home will continue through his writings and, now, the postcard pictorial history of Alabama.

Swem said the bulk of Hall’s extensive collection of postcards was amassed when he was living and working in Kentucky.

“Wade was always moving around – going places searching for postcards,” he said. “He went to antique shows, antique malls, flea markets, estate sales, fairground shows, anywhere he thought he might find postcards. He scorched the earth looking for postcards.”

Swem said Hall liked to search for postcards in Indiana and Ohio “because they had so much of everything.”

“Wade was especially interested in Alabama postcards because it was his home state,” Swem said. “He was also interested in Western history and in Western sites. His postcard collection is an extensive pictorial history of our country.”

Postcards were purchased as travel souvenirs or for mailing to family and friends. And, the cards captured history in a unique way. Hall’s collection captured the history of home.

Ruth Elder said that, in the less than 150 years since postcards were introduced to the United States, they have become one of the most popular items to collect. The first postcards were issued in America in 1873. Postcards became popular because people could send a quick “hello” or show a friend or relative where they were staying for only a penny. Many postcards took the place of pictures in the family albums showing vacation scenes, Elder said.

The Golden Age of postcards lasted from 1900 until about 1920 when widespread use of the telephone began.

Elder said the “Wade Hall Postcards” traveling exhibit gives viewers a unique look at an America that has all but vanished.

“The traveling exhibition has two distinct exhibits,” Elder said. “One is of Alabama’s main streets and the other is of Alabama’s historical buildings. The exhibit features enlarged images of the post cards, not the actual post cards.”

“Wade Hall Postcards: Historical Scenes of Alabama” features scenes and buildings that are familiar and rare. Locally, people will get a unique look at many familiar places, including the Pike County Courthouse and North Three Notch Street. The Boll Weevil Monument in Enterprise, Dexter Avenue in Montgomery and Eufaula Street in the bluff city are among the Alabama sites that have weathered the times.

“Early postcards were black and white so companies started the practice of colorization to make them more attractive,” Elder said. “Colorization is the process of sending the postcard photograph to another country to enliven with color. India and Italy were often chosen because they specialized in using exotic colors, which caught the eye of the common person. Colorization has a major effect on a picture. It could make an ordinary scene look beautiful or idyllic. The postcards in the exhibit are examples of colorized sites in Alabama.

Whether the postcards in Hall’s collection are in black and white or color; whether they are the original cards or enlarged images, the postcards have a story to tell and they tell it extremely well, Swem said. “Wade Hall Postcards” is a must-see exhibit for vintage postcard enthusiasts, history buffs and folks that just love “Sweet Home, Alabama.”

The exhibit opened Thursday at the Troy University Library and will run through February. The exhibit features historic buildings of Alabama. The public is invited.