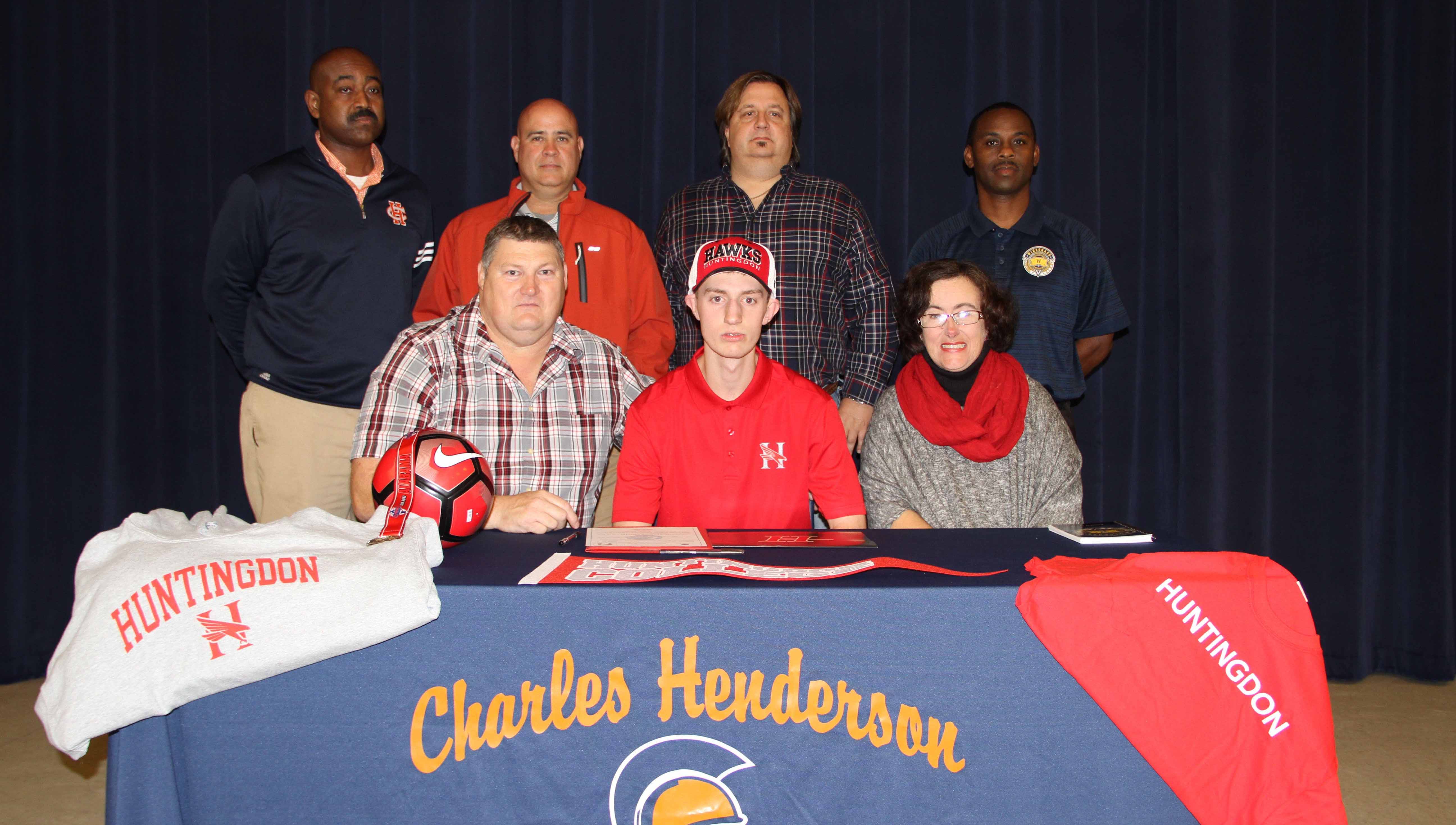 When Harrison Johnson lifted the pen Friday morning to sign a scholarship to play soccer at Huntingdon College, you could see his chest expand and subside rapidly, as if his heart were about to burst through his shirt, as if he had just sprinted the length of the field.

When Harrison signed his name and pulled the Huntingdon hat snuggly over his head, the room at Charles Henderson High erupted into cheers as his classmates celebrated with him, and for him. This was a day for the underdog. This was a victory for anyone that has ever been bullied in the hallway.

Although not related by blood, Hunter Kennedy – a surrogate big brother – was one of those in attendance and leading the cheers.

“I’m so proud of him,” said Kennedy, a massive 2013 all-state CHHS offensive lineman, and now on the Troy University football roster. “Like I told him today, any time you can go to the next level in any sport, that is an accomplishment. When he told me he was looking between Faulkner and Huntingdon, I told him just whatever you do, do it to the best of your ability, and he has done that. He has taken a love for soccer and taken it very far. I’m just extremely proud of how far he has come athletically and as a person.”

There was a day, as recent as three years ago, that no one saw this coming. Kennedy was a senior, sitting in the lunchroom with some other senior football players, and he saw Harrison sitting alone. Kennedy, Austin Ingram and Hunter Steed then did what Harrison’s mother has said was a life-changing decision.

“Harrison played football with us when he was a freshman, and he always was out there being real positive,” said Kennedy. “One day at lunch we noticed Harrison sitting by himself so we told him to come sit with us at the senior table and hang out and we tried to bring him out of his shell, because he is really a good kid. He’s always just trying to make everybody happy and the more we started hanging around him, the more he grows on you, because he is such a good kid. He is always smiling, always laughing, always trying to make everybody around him happy.” 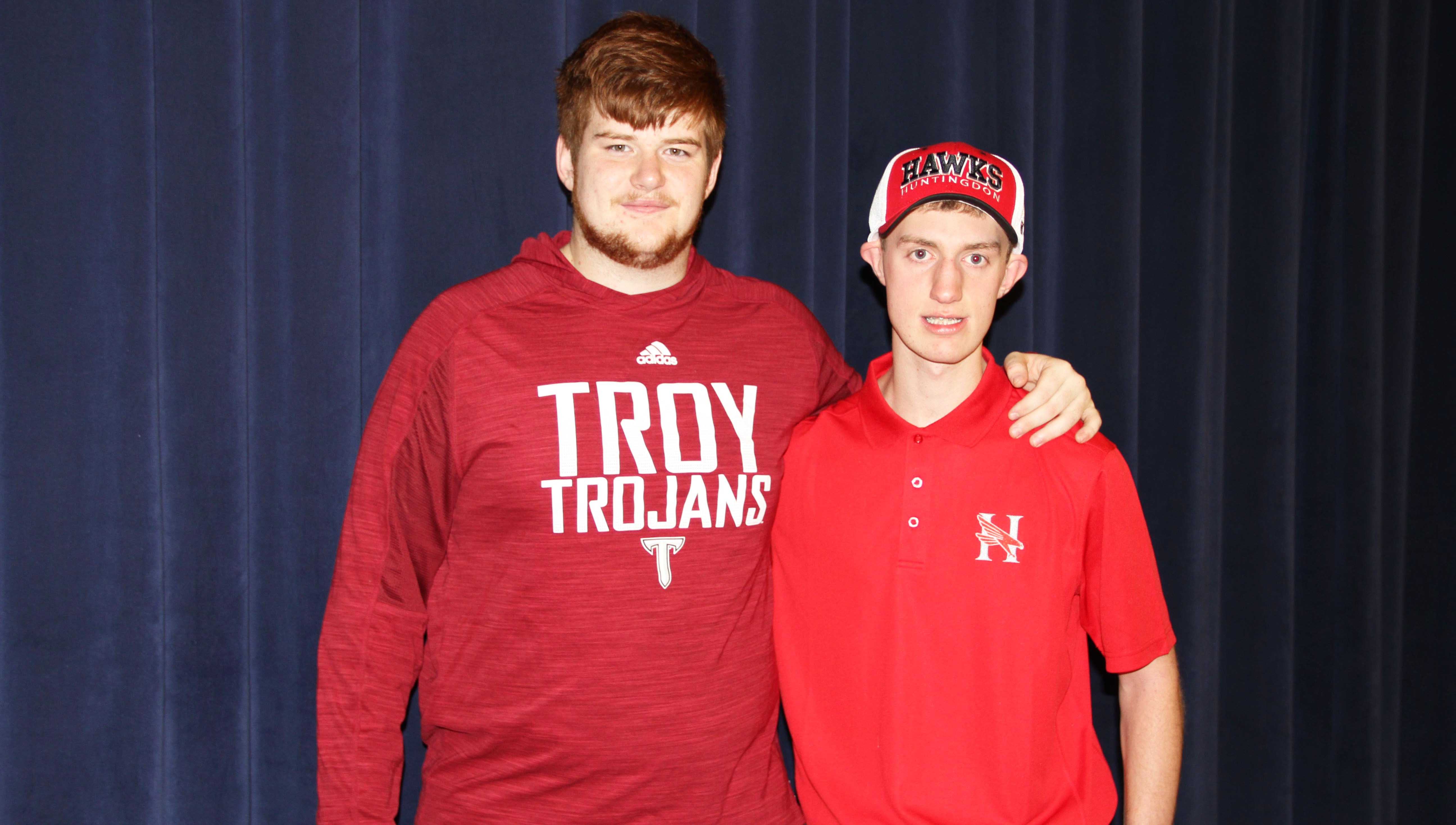 Hunter Kennedy, left, a 2013 graduate of CHHS and all-state offensive lineman, was there for Harrison Johnson’s signing Friday.

Not only did Harrison become more popular among his classmates, he also became an unlikely, aggressive, dominant and furious player on the soccer field.

“Harrison was on our team when we won the state championship in D2 a year ago for U-18,” said his club soccer coach Kenneth LeBlanc of the Wiregrass Futbol Club. “With Harrison playing for us we lost only one game in two years. With him you see diligence, and when you see him run, when you put him on someone, you better believe they are not expecting what is about to come at them.”

For Harrison, who plays wing and forward for CHHS soccer, this was a day he was proud to see.

“It’s just a blessing to have this opportunity,” said the senior. “If it were not for my teammates and my coaches, I would not be here today. The first day I went to visit Huntingdon, I was very excited, maybe overwhelmed at first, but as I got to know the people I felt more at home. I’m also very thankful for my family, and how they have been supportive of me all of these years, and how my mom and dad have raised me. It’s a blessing to have my parents.”

Harrison’s mother, Mrs. Ashleigh Johnson, felt immense pride as she fought back tears throughout the ceremony, and was thankful of the support her son has received from many at CHHS.

“It really means the world to all of us, not to mention that Harrison will be a third-generation Hawk,” said Mrs. Johnson. “My mother, Patricia Hall and I both are graduates of Huntingdon, and it is rare to have a third family member come through there. This is beyond our wildest dreams. We never thought this was going to be a part of the picture. It is the hope in the back of ever little boy’s mind to play college sports, but being realistic we know that is not always a reality. But Harrison did not let that stop him and he just continued to progress and grow.

“Hunter Kennedy, Hunter Steed and Austin Ingram, those three young men really looked after Harrison and took him under their wing as a ninth grader, and I really believe had it not been for those three young men, I don’t know exactly where he would have been. But to be able to develop the confidence that he has, it has developed because of those that stood beside him.”

For all those who were picked last for basketball, or not at all, this day is for you.