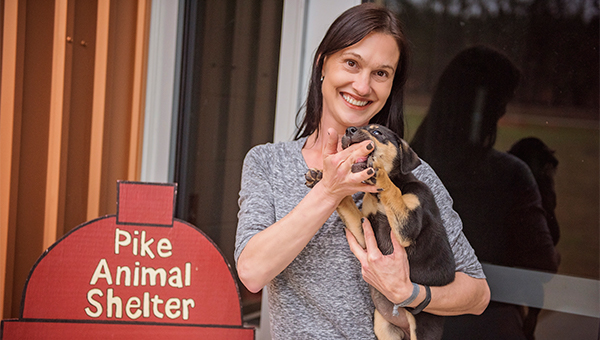 The long-awaited Pike Animal Shelter is almost ready to open it’s doors and already has about 20 dogs in the facility. The shelter replaces the old pound and comes with some major changes, including its ability to hold cats and being open to the public. Above, Director Jacqueline Meeks holds one of the shelter’s puppies.

The old Troy pound is officially closed and the new Pike Animal Shelter needs just a few more things to be finished before it opens to the public.

Director Jacqueline Meeks said the new shelter is a big improvement over the old facility.

“It’s literally like comparing apples and oranges,” Meeks said. “The pound was just a 16-run kennel in a cement building. This facility has observation rooms, cat rooms, medical rooms – there’s just so much more room here.”

The new facility will have room to hold 100 cats and has 20 runs for dogs in addition to a “small dogs room” and another extra room for small pets.

Unlike the pound, the new shelter is open to the public so that people can simply walk in and adopt a pet.

“At the pound, you had to have an appointment to come look at the dogs and it was very difficult there,” Meeks said. “This is a facility that people can just walk into and take a look at the pets.”

The new shelter also differs from the pound in the fact that it will be able to house cats, although Meeks said that the space for the cats won’t be ready until next week. The shelter already houses about 20 dogs of various breeds and sizes.

Another difference is that the new shelter has adoption rooms and a fenced-in play yard that will allow potential adopters to spend some playtime with the pets before making the decision to take one home.

Meeks, a veterinary tech, said that one of the “biggest things” at the shelter will be educating pet owners on how to take care of the animals.

“We want to educate on spaying and neutering and taking proper care of the pets,” Meeks said. “With this shelter, we can teach people that when they come in to adopt.”

Meeks’s background means that the shelter will actually be able to provide all of the basic treatment that the animals need in-house.

Meeks grew up in Troy and said she’s always been around animals and decided early on to spend her career with them.

“I’ve always been with animals since I was a kid,” Meeks said. “I’m actually a nurse and a vet tech, so it all comes together.”

The biggest needs at the shelter now, Meeks said, are volunteers and donations.

“We are desperate for volunteers,” Meeks said. “We also need donations of things like dog and cat food, cat litter, towels, toys and Chlorox.”

The staff at the shelter will consist of Meeks, two animal control officers¬– one from the city and one from the county– and two other employees. The rest of the force will be made up of volunteers, Meeks said.

Meeks said Mayor Jason Reeves took the shelter, which had been in the works for years, and made it a reality.

“Personally, without our mayor, I don’t think this would have been possible,” Meeks said. “He has been so wonderful for our city. He is the reason this shelter was built. He came in and said ‘Let’s make this happen.””

Meeks advised that residents should not drop pets off at the old location, as it is permanently closed.

Although the new shelter is not officially open yet, Meeks said donations can be dropped off at the new location at 800 Henderson Highway from 8 a.m. to 5 p.m. Monday through Friday. An opening date has not been set yet for the facility, but Reeves said that the City is targeting a February opening date.