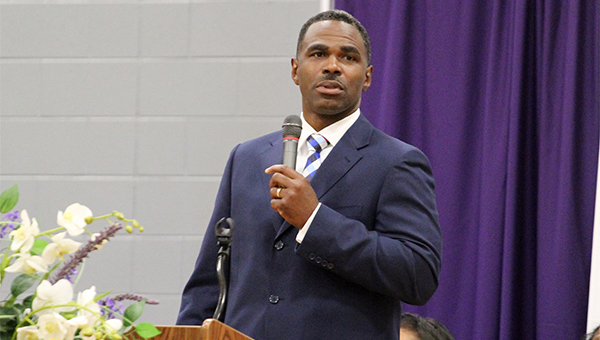 Rev. Charles Sankey Jr., a GHS alumnus, spoke to the students about the meaning of the month and what it means to be a part of “black history.”

Sankey said he began thinking about the meaning of the term when his 6-year-old son Darius overheard him talking about the coming event and simply asked him “What is black history?”

“There I was as a black man, a black pastor, a black politician … and I couldn’t explain what black history was,” Sankey told the students.

“So I thought about some of the great figures in black history and tried to figure out the common denominator.”

Sankey mentioned important black figures from all parts of history including activists such as Martin Luther King Jr. and Rosa Parks, sports figures such as Michael Jordan and Serena Williams and inventors such George Washington Carver and Madam CJ Walker.

The common denominator, Sankey said, was that they were all contributors.

“They contributed their minds,” Sankey replied.

Sankey continued to say that these people ultimately sacrificed not only their minds, but their talents and their courage as well.

“When Rosa Parks refused to give up her seat on the bus, that took courage,” Sankey said.

“But she knew that what she was doing would benefit somebody else.”

Sankey said the definition he found on the website for black history month took his definition one step further and perfected it.

“To honor those African-Americans that contributed to American history,” Sankey said, reading the definition to the crowd. “They contributed so that black history has become white history. It’s become Hispanic history.

Sankey left the students with a charge to contribute their minds, talents and courage to American history as well.

The program also included singing, band music, a spoken word performance and the reading of Martin Luther King Jr.’s “I have a dream” speech by one of the students.