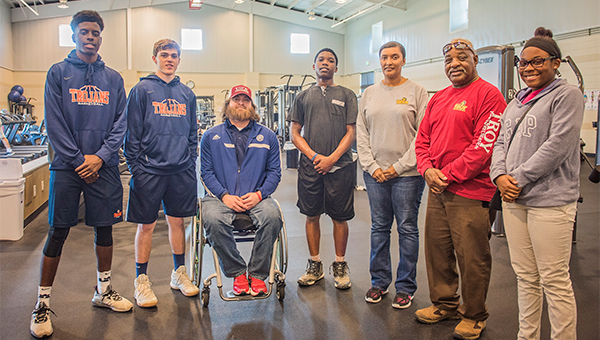 More than 100 students from Charles Henderson Middle School went to work on Thursday as part of the school’s “job shadow day” program.

The school sent 130 eight- grade students to various job sites for the school day instead of spending the day in classes.

Tiana McWhite, student counselor at CHMS, said that the job shadow day is important for students that are just beginning to think about what careers they might want to go into.

“We look forward to this day every year,” McWhite said. “Eighth grade is a very crucial point in a student’s educational foundation where they begin to think of career possibilities.”

Students chose from a variety of business types, from city government to law enforcement to veterinary care.

Danny Barron, captain of patrol with the Troy Police Department, said that the three students shadowing at the department got a more complete picture of everything that happens in law enforcement.

“I kind of oversee patrol so he got to see what all I do and he saw just how much paperwork is involved in law enforcement,” Barron said. “I got him out and showed him around Troy a little bit and he got to observe an officer work a private property traffic accident.”

Barron said each student got a full tour of the police department and were shown the process that takes place every time somebody is arrested.

Glenda Fayson with the Colley Senior Complex said two students shadowing there found out just how much work it is to entertain the seniors.

“You name, it we did it today. They said it was a big responsibility,” Fayson said. “We have to do a lot here because we deal with seniors. They didn’t know it was this much responsibility.”

The students helped set up for the organizations upcoming Mardi Gras Gala and also helped with some of the classes that the complex provides.

Dr. Lee Hicks, superintendent of Troy City Schools, said the experience is an important part of preparing students for the workforce.

“This has been a program that our middle school has put on for several years now and its great that they get to shadow jobs here in our community,” Hicks said. “I think it opens up the students eyes to what kind of career they want to pursue and what it takes to be a professional. “

Hicks said the school system couldn’t do what they do without the help the businesses and organizations in the community.

“I also want to thank the community for opening up their doors,” Hicks said. “We know it takes away from a normal business day sometimes, but they take the time to show the students what it takes to be successful.

“We’re just excited to be able to show the students what the world really has in store for them.”