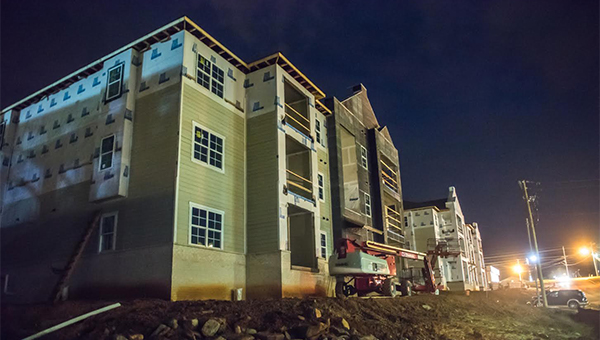 Messenger photo/Jonah Enfinger
The District on Dozier is under construction on Dozier Drive and is set to have all six of its apartment buildings open by August, providing 345 extra bedrooms in the City of Troy’s housing market. The complex includes perks such as a resort-style pool, dog park and clubhouse. Two-bed, two bath and three-bed, three-bath rooms are available for lease now as the office is temporarily working out of the nearby Hampton Inn and Suites until the clubhouse opens next week.

Anybody wondering about the towering buildings being built on Dozier Drive don’t have to wonder any longer.

The seven buildings make up the new “District on Dozier” apartments that will open in May.

Lori Davis, leasing assistant, said that rooms are already being filled quickly for the three buildings that open in August.

“The majority of what we have signed is for August,” Davis said. “The buildings that open in May still have a lot of availability right now.”

The apartment complex just started taking applications for leases with an office set up at the Hampton Inn and Suites while they wait on the buildings to be finished.

Davis said it’s been more difficult to fill rooms for the three other buildings that open in May, primarily because Troy University students will be out of school and many return to their hometowns during the break.

“A lot of the students that are going to school at Troy and are coming back also don’t get out of their leases until July,” Davis said.

Courtney Ash, property manager, said that she’s hoping students that are staying over the break will start to fill in the spaces.

“I think this is an excellent option for people who have jobs, take summer classes, or need to be here early for camps and recruitment,” Ash said.

The District on Dozier apartments are open to anybody, but Davis said the units are designed specifically with university students in mind, as residents are charged per bedroom instead of per unit.

There are two room options to choose from at the apartment complex: a two-bedroom, two-bath unit and a three-bedroom, three-bath unit.

One of the perks of the complex that Davis said many of their residents have been excited about is the elevators.

“We’re the only apartments in Troy that have elevators,” Davis said.

“It makes it easier for the college kids and especially helps with moving stuff in.”

Other perks at the apartment complex will include a pool, coffee bar, fitness center, business center, grilling area and dog park.

“We are Troy’s first and only luxury style apartments,” Ash said. “We offer fixtures and appliances that no one else offers. For instance we have stainless steel appliances, fresh neutral colors, open shelving, shiplap and much more.

“Outdoors we offer a resort style pool with a beach style entrance and a dog park for our pet owners and their companions to enjoy.”

Ash said the location of the complex is ideal, as it is in close proximity to shopping destinations and the campus.

“Our location is within walking distance of shopping, restaurants and we are also on the shuttle route for the university,” Ash said. “It’s the perfect location for convenience and luxury living.”

The apartment fills a need in a saturated housing market, as record numbers at Troy University in the fall led to a shortage of availabilities, especially for international students that arrived later than most of the American students.