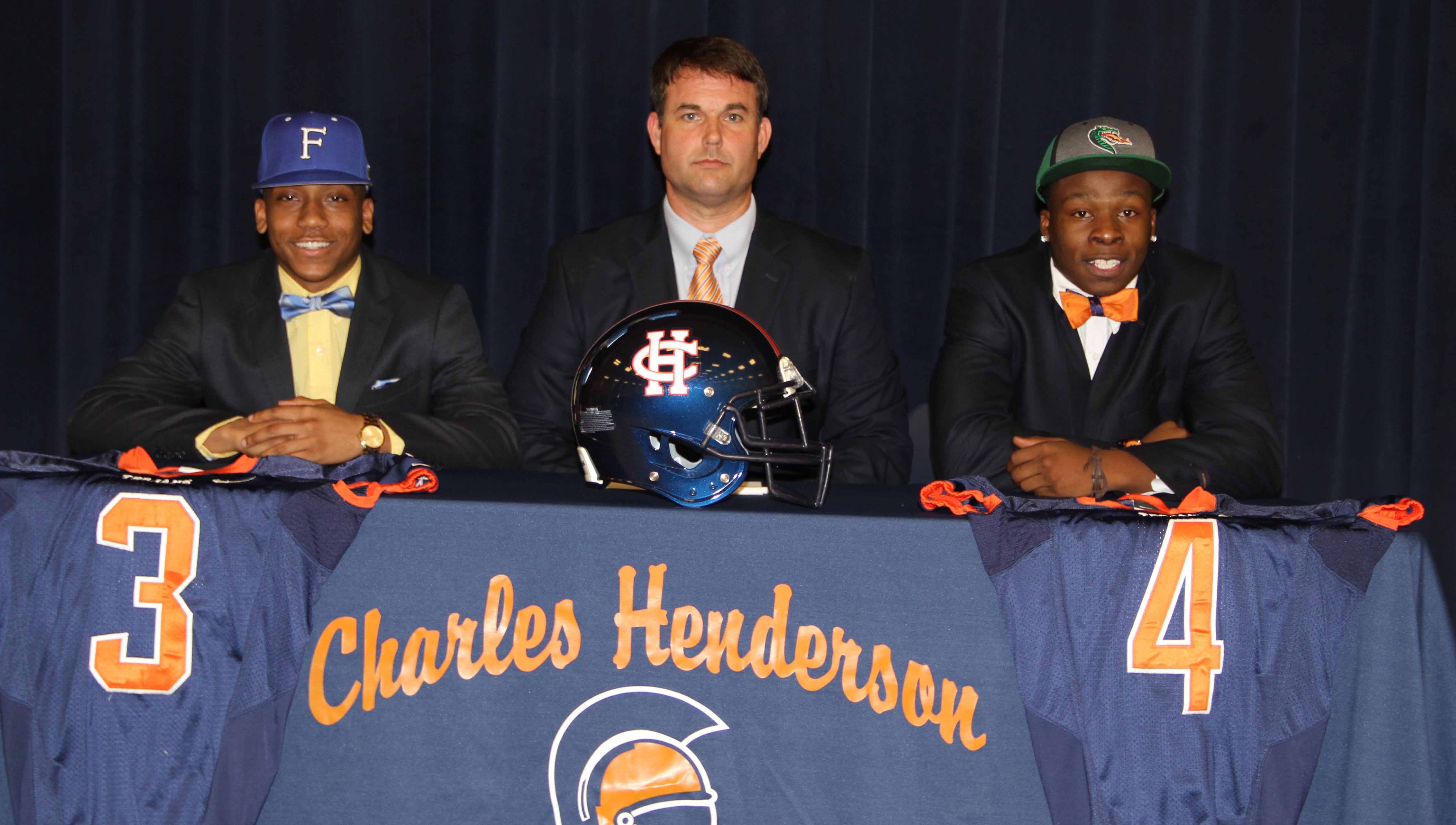 Last year there were some scattered college scholarship signings at Charles Henderson High School, but on the morning of National Signing Day for football, the cafeteria stood empty.

The 2016-17 school year has been different, as Kobe Griffin and Jabronski Williams signed their national letters of intent Wednesday before a standing-room-only crowd of students, faculty and family. Their signing brings the number to nine students to sign a college scholarship this school year, with at least three more expected to sign in coming weeks.

Both seniors, Griffin chose to play for the revived University of Alabama-Birmingham football program while Williams signed to play at Faulkner University in Montgomery.

“Last year we had zero kids sign on National Signing Day, and one year later we have made that a point of emphasis,” said CHHS head football coach and athletic director Brad McCoy. “We talked about academics, and all of the things it took. We have two that signed today and three more that will sign later. This is what we are trying to get through to everybody, that this is proof that hard work pays off. For the younger athletes we hope they understand how important the A’s and the B’s, the GPA and the ACT all are.” 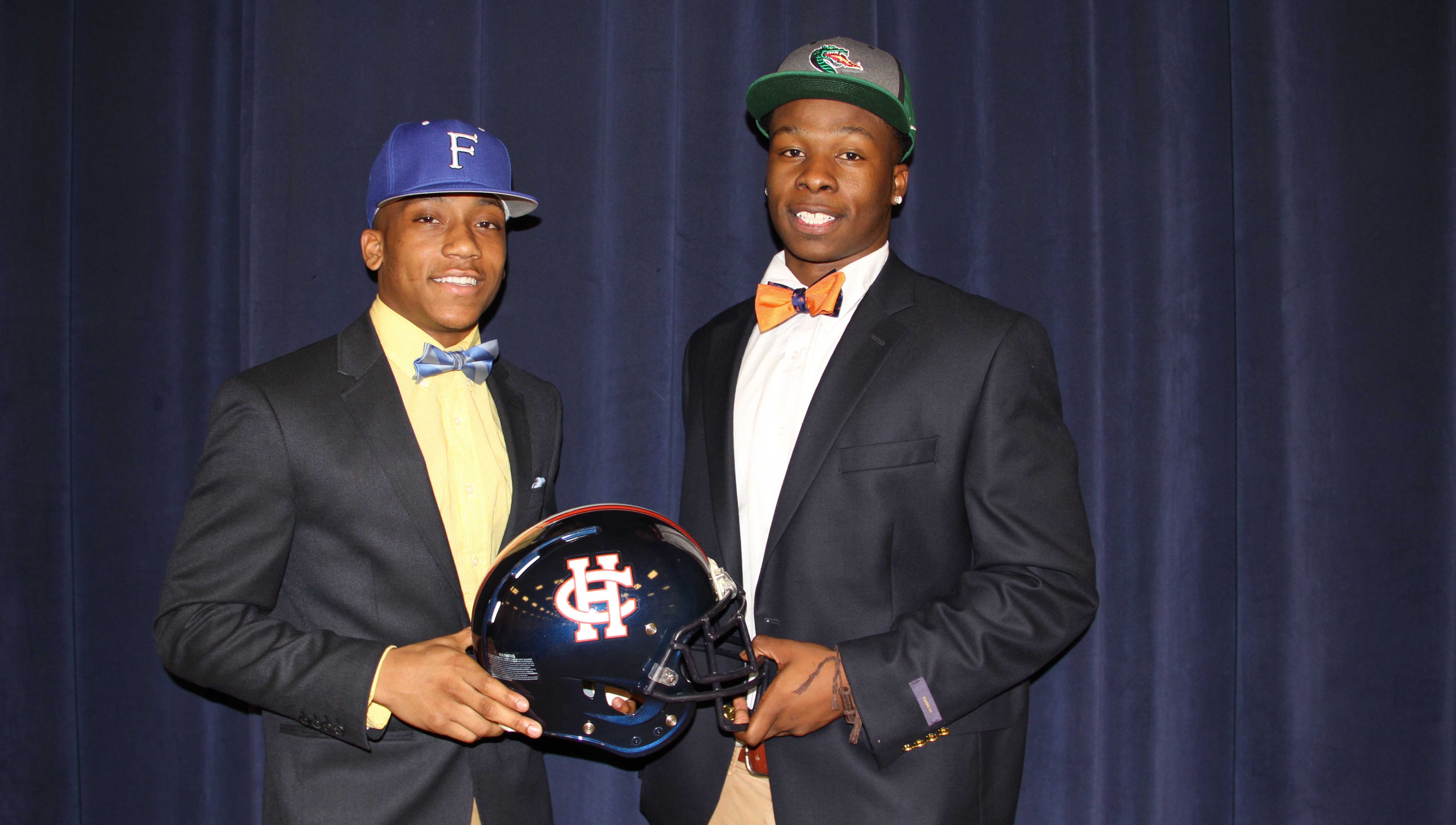 This past season, Griffin, a 6-foot, 195-pound safety, posted 87 tackles and had six interceptions including eight pass break-ups.

“This is a very special day for me, and I want to thank God and all of the people that were behind me, from the beginning to the end,” said Griffin. “My time was good here, and I really enjoyed playing at Charles Henderson High.”

Griffin is expected to play safety at UAB, and plans to major in Kinesiology.

Williams, a versatile 5’9”, 165-pound running back, rushed for 825 yards and 14 touchdowns as a junior and this past season gained 1,125 yards and scored 20 touchdowns on the ground while pulling in 240 yards and two TD’s on the receiving end.

“It is really a blessing, something I have been waiting for a very long time, and just a very humbling moment that I am very appreciative of,” said Williams. “It’s really a great feeling to have. I have worked very hard to have a scholarship to a really good school to play the sport that I love. I’ve been here two years and it has been the greatest time of my life. I love the coaches and everything about this school. I appreciate all that have helped me – my teachers, my classmates, my friends. I just appreciate everyone for everything.”

Williams is expected to see time at slot receiver and slot running back, while studying Sports Management.

CHHS Principal Brock Kelly is proud of the leadership of the seniors, and the example they set for the underclassmen.

“This is one of those days that this moment will stand out for them, to go to college to the next level,” said Mr. Kelly. “When I was asked by their coaches if these guys could play on the next level I said yes, they had the talent, and no one questioned that. But what stood out for me was their work ethic, character and the way they represented Charles Henderson High School on and off the field. We have had nine student-athletes sign with colleges from softball, baseball, football and one with soccer. All nine of them are high-character people, and they carry themselves with integrity. The biggest winner of this day is the schools they are signing with.”