Storytelling festival draws fans from near and far 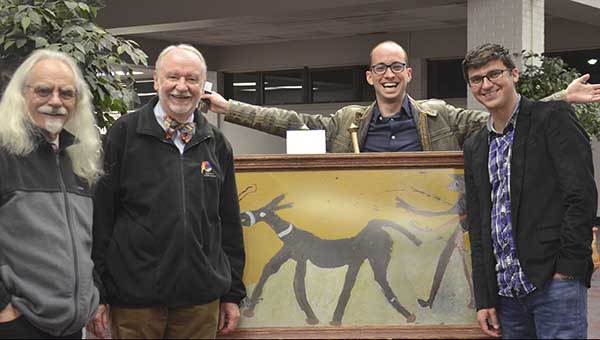 People from right here in Pike County and from around the world came to hear Michael Reno Harrell, Donald Davis, Adam Booth and Josh Goforth sing and tell stories at the 11th annual Pike Piddlers Storytelling Festival on Saturday.

When Rob and Janet Chinchella left their home in Wollongong, Australia, to tour the United States, they could not have imagined they would be sitting in a theater in Alabama listening to mountain people tell stories.

But that’s exactly where the Chinchellas found themselves on Saturday.

The couple was camping at Deer Run RV Park and were invited by Dale and Ester Voltz to “come along with us.”

The two couples were among the one thousand folks who attended the Pike Piddlers Storytelling Festival at the We Piddle Around Theater on Friday night and the Trojan Center Theater on Saturday.

Rob said he didn’t understand all of the Appalachian dialect but he was well entertained.

“Everyone here was so friendly. I was glad to hear such good stories.” Janet said she liked the stories and the music.

“The Pike Piddlers Storytelling Festival gave me such a nice feeling about the people of the South,” she said. “It was so good to be here.”

Cathie Steed, ticket chair for the sponsoring Brundidge Historical Society, said “piddlers” came from as far north as Florence, as far south as Gulf Shores, as far west as Lafayette, Louisiana and as far east as Atlanta, about 26 different cities and towns.

Steed said many of those who attended the weekend storytelling event are dedicated storytelling fans. Some, like Cindy and Jackie Boswell, were there for the first time and “will definitely attend next year.”

“A large number of people have already made reservations for next year’s storytelling festival,” Steed said. “Most people don’t understand what storytelling is all about, but once they come, they’ll most always be back.”

He and his wife, Barbara, are devoted fans of storytelling. However, he had his doubts at first.

“I thought, ‘storytelling? I just don’t know,’ but once I went, I was hooked,” he said. “I can relate to the stories. It’s our history and our culture. I highly recommend it.”

Ward said a storytelling concert has a family atmosphere. The audience and teller seem to become as one. “The talent that is continually brought to Pike County by the Brundidge Historical Society is impressive,” he said.  “I’ve never seen anything like it. It’s amazing how you can be so entertained by just a story. The time goes by so fast and you’re not ready for it to end.”

“People around us were responding to the stories and to the music,” he said. “It was a great atmosphere and we were glad to be a part of something so much fun and so meaningful.”

Ward said those who have never been exposed to storyteller should get exposed. “They don’t know what they are missing.”

Trojan Peggy Davis, who is a regular at the Pike County Storytelling Festival, said you can’t tell others what they are missing; they have to just come see. “And, storytelling is not just for older people. It’s for young people, too. We need to get the word out. Storytelling is for everybody …

“I don’t know how to tell anybody how good it is. You can’t help but enjoy it, even if you tried not to enjoy it.”

The Pike Piddles Storytelling Festival is sponsored, in part by the Alabama State Council on the Arts with support from the National Endowment for the Arts.