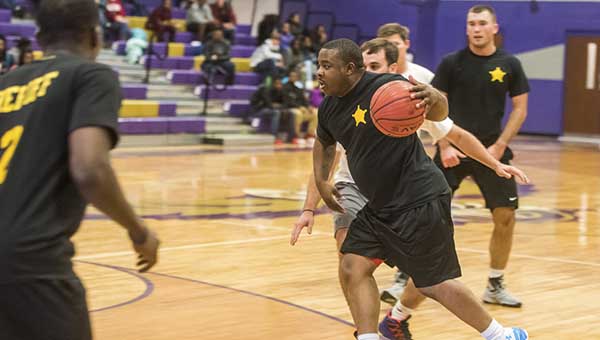 Deputies with the Pike County Sheriff’s Office make a pass during a fundraiser basketball game at Goshen High School to raise funds for Goshen student Denver Buck, who was seriously injured in an accident the weekend before. Buck is still in a coma at Baptist South in Montgomery.

The Pike County Sheriff’s Department and Goshen High School teamed up on Friday to raise money for a student who was severely injured in a car wreck the weekend before.

The student, 16-year-old Denver Buck, was attempting to turn onto U.S. Highway 231 South from Trojan Way when a Ford F150 travelling in the northbound lane struck the driver’s side of his vehicle, sending both vehicles into the median.

The driver of the Ford F150 and a 16-year-old passenger in Buck’s vehicle both sustained minor injuries, but Buck had to be transported to Baptist South in Montgomery with life-threatening injuries. Buck is still in a coma and doctors say he has a long road to recovery.

Goshen principal Major Lane said the school wanted to do something to show Buck and his family love.

“We’ve been praying with that school and with the family. Our hearts go out to the family,” Lane said. “This is a little something we could to express the love that we have for them.”

Buck’s father, Orlando they have received over the past week, including the donation by the high school.

“We cannot express with words the appreciation we have for those who have prayed, visited, sent words of encouragement, or given financially, or in other ways, to show their support for Denver,” Buck said. “Denver is a wonderful young man loved so dearly by his family and friends.”

Lane also praised the involvement of the sheriff’s office.

“The Sheriff’s Department always does a great job for the community and a lot of those officers are graduates of Goshen,” Lane said. “We had a wonderful get-together with them this afternoon. This has just been a community effort to express love that we have for that family.”

Sheriff Russell Thomas said the department wants to take every chance possible to engage and support the community.

“There’s no better community policing than our department being involved with the schools, playing in front of the students and faculty and showing that we’re normal people just like them,” Thomas said. “It was a fun day and the students had a lot of laughs. Some of us are older and don’t move like we used to. We’ll be a little bit sore tomorrow, but we’ll get over it.”

Orlando updated Denver’s condition on Saturday and asked for prayers from the community.

“This morning, during his neurological testing, he exhibited more cognitive thinking abilities,” Buck said. “He was able to find and stop pain and he was able to give a thumbs up with his right hand on request. The neurologist was very happy to see this response, as it is showing some of his higher thinking abilities are definitely intact and healthy enough to work at this point.”