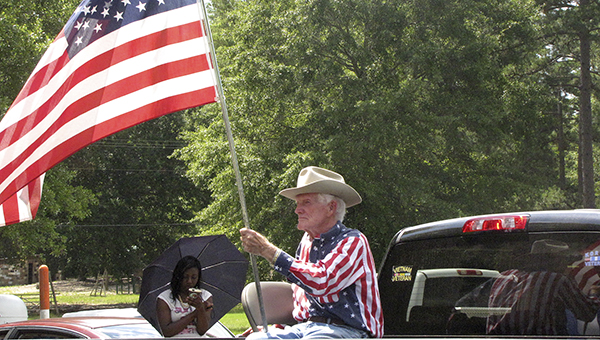 Ben Andress, a founding member of Charlie’s Angels and a proud veteran and patriot, passed away on Sunday. He was known throughout the county as the flag bearer for parades and patriotic events.

Pike County has lost an Angel.

Ben Andress, a charter member of Charlie’s Angels, died on Sunday, leaving the county void of one of its greatest patriots and its unfailing flag bearer.

Charlie Dunn, leader of Charlie’s Angels, and Andress grew up in the Banks community and were friends since childhood.

“We shot marbles together. I won all of his marbles but, to hear Ben tell it, he won all of mine,” Dunn said, with a laugh. “Ben has always been patriotic. When we organized Charlie’s Angels about 19 years ago, he was there and ready to go. I could tell by the look in his eyes that Ben wanted to be the one to carry the flag. He loved the American flag as much as I do.”

Andress, 82, served his country with the Army and was retired from the Alabama National Guard.

Dennis Griffith, American Legion Post 70 post adjunct, and Freddie Turner, VFW Post 5077 quartermaster, said Andress was one of the most patriotic gentlemen they have ever known.

“You couldn’t miss Ben at a parade,” Griffith said. “If he wasn’t carrying the flag, he would be standing proudly, in parade dress, with the American Flag.”

Turner said, too, that Andress bled red, white and blue.

“Ben loved the flag and he carried it with pride,” Turner said. “I don’t know of anybody that loved and respected the American Flag more than Ben. He carried the flag in parades as long as he was able and he honored it always.”

That was an especially proud day for Andress in that he was a flag-bearer twice in one day.

“Ben was one faithful guy to the Meeksville Parade,” said Earnest Green. “Even when walking got hard for him, he was determined. One parade he walked a while and then somebody picked him up a carried him the rest of the way. We had a trailer that he could sit and ride on but he wouldn’t sit. He wanted to stand up to hold the flag.  Ben Andress was very special to us.”

As a member of Charlie’s Angels, Andress was also the flag bearer at military funerals in the local area and he took great pride in that.

“He was a real patriot and a dedicated supporter of our veterans’ organizations,” Dunn said.

He also cooked at the Brundidge National Guard.

“I remember those hardtack biscuits and that SOS beef on toast Ben fixed for us,” Turner said. “Ben could cook pancakes, sausage and eggs all at the same time and right by himself. He didn’t want anybody in the kitchen but him.”

Andress was quite a jokester.

“When he got where he couldn’t carry the flag, he said it was because his tires were slick,” Turner said, laughing.

Griffith said, too, that Andress had a great sense of humor.

“One morning at the breakfast at American Legion post, he got down and did one-arm pushups to show us he was in good shape.

Andress was a member of the Masons and a dedicated bell ringer for the Pike County Salvation Army.