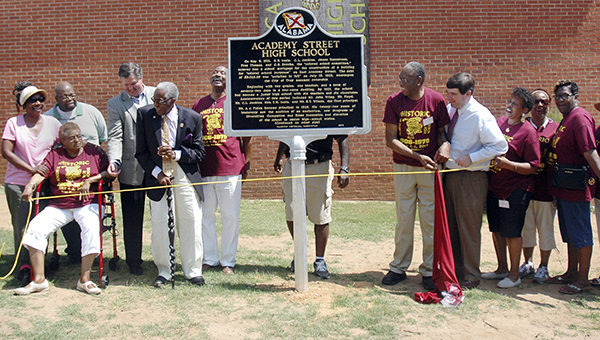 This file photo shows alumni of the Academy Street School during a reunion and historic marker dedication ceremony in July 2014. Residents in District 5 have long lobbied for rehabilitation and renovation of the historic school, and District 5 Councilwoman Wanda Moutlry said Thursday efforts are underway to renovate the school for new purposes.

The historic high school is an important place to many of the districts residents that attended school there when it was still open.

At recent District 5 meetings, residents voiced their desire to see something done with the building so it can be used for class and family reunions as well as other community events.

Moultry told attendees Thursday that the City is working to get estimates for a new roof for the building and is also coming up with a design plan over the next few months.

One resident that lives on Segar Lane asked for speed bumps to be put in as he noted drivers were speeding through the area. Moultry said that Wiregrass Construction will be putting speed bumps in within the next week.

Moultry also addressed a question from the previous meeting about a Community Development Block Grant that had been requested to fund the removal or rehabilitation of dilapidated houses in the district.

“What happened was that was filed but then it fell through somewhere,” Moultry said. “So what we’re going to do is get someone to write that grant again and see it through so we can get some answers.”

Moultry said the grant has to be applied for first in order to see what stipulations there might be on rehabilitating houses that people are still living in.

Another resident asked Moultry at the December meeting about getting curbing on Smith Avenue where he said rains are washing the bank away. Moultry said that the City is getting evaluating  the feasibility of curbing the streets.

Moultry also brought a map of the City’s five districts so that residents could clearly see what falls inside of District 5. A resident a the previous meeting requested this, as she said she often got confused about where the borders of the district actually lie.

Moultry also took concerns from residents at the meeting.

Several residents asked about getting a heavier police presence on certain streets such as Segar Lane, Segars Street, Tanyard Street and Academy Street.

One resident also mentioned that an area near Tanyard street needs to be “tidied up” more regularly as logs are often left strewn around.

It was also brought up that there is a cement cover on a sewer drain that is crushed on the corner of Henderson Avenue and Tanyard Street.

“We need to engage the school system and do what we can to help the children in our community,” Thomas said.

Thomas also asked Moultry to inquire into what can be done to help give District 5 residents a deeper look into the budget hearing process and more information about what goes into the budget.

Moultry took down the requests and told the attendees that she would be asking about their concerns.

About 20 residents attended the meeting on Thursday.

Residents at the meeting voted to hold the district-wide meetings quarterly during 2017, with additional meetings to be scheduled as needed.

The next meeting willl be held on Thursday, April 27 at 5:30 p.m. in the City Council Chambers.

The following meetings will be held at the same time and place on Thursday, July 27 and Thursday, October 26.