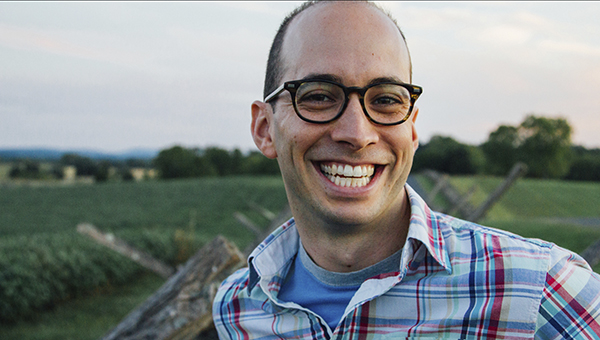 Each year, the Pike Piddlers Storytelling Festival features a new voice – but a new voice only to the Pike County festival, which is sponsored annually by the Brundidge Historical Society.

This year’s new voice is a seasoned storyteller. In fact, Adam Booth of Shepherdstown, West Virginia is so good at his “trade” that he has won the West Virginia State Liar’s Contest four times, making him a Champion Liar as well as a Champion Storyteller.

Adam Booth has been described as a “real West Virginia treasure” and it will be easy to “hear” why when he takes the stage at the Pike Piddles Storytelling Festival, Friday at the We Piddle Around Theater in Brundidge and Saturday at the Trojan Center Theater at Troy University.

Mernette Bray, a member of the BHS storytelling committee, saw Adam Booth in concert at the National Storytelling Festival in Jonesborough, Tennessee in 2015 when he was a new voice at the “granddaddy of all storytelling festivals.

“The first time I heard him, he shared the stage with another teller and each one had 30 minutes on stage,” Bray said. “He was so good that I wanted to hear him again.”

The next day, Bray said it was pouring rain but she braved the weather and “climbed the hill” to hear Booth.  “At Jonesborough, the venues are big, circus-type tents that will seat more than a thousand people,” she said. “The tent was packed and several of the storytellers were there to hear him.”

Booth was on stage for an hour and he held the audience captive, Bray said.  “All you heard was his voice and the rain. He received a standing ovation and was invited back on stage. We are proud to have Adam Booth at the Pike Piddlers Storytelling Festival.”

Booth’s original stories blend traditional mountain folklore, music and an awareness of contemporary Appalachia. His work, both humorous and touching, is influenced by the rhythms and gestures of generations of diverse West Virginia storytellers.

Booth has a passion for sharing traditional and contemporary Appalachian stories with audiences of all ages.  “At first, I thought it was cool to tell everyone I was a ‘Champion Liar’ but then I started listening to everyone else and realized it should be more than just a title,” Booth said. “I traveled to different places and people would call me an ambassador of West Virginia and they were questioning what it was like. I want to be a representative for the state.”

Booth said his aim is to educate people about the Appalachian region through story, music, humor and tenderness.

Booth has a real knack for storytelling. He tells tales and real tales. He shares personal stories. Any way he tells, he wins the audience over.

The festival kicks off Friday night at the We Piddle Around Theater in Brundidge and continues on Saturday at Troy University’s Trojan Center Theater.Adam Booth will be joined on stage at the Pike Piddlers Storytelling Festival by master storytellers, Donald Davis, Josh Goforth and Michael Reno Harrell. Tickets are available for the 10 a.m. and 6:30 p.m. storytelling concerts at the Trojan Center Theater at $10 each. Tickets are available at The Messenger or by calling 334-344-9427.

The Friday night storytelling concert and the 2 p.m. concert at the Trojan Center are sold out.

Preshow music begins 30 minutes prior to the storytelling concert. The featured groups are The Lighthouse String Ensemble, The Benton Brothers & Company and The Hendersons.