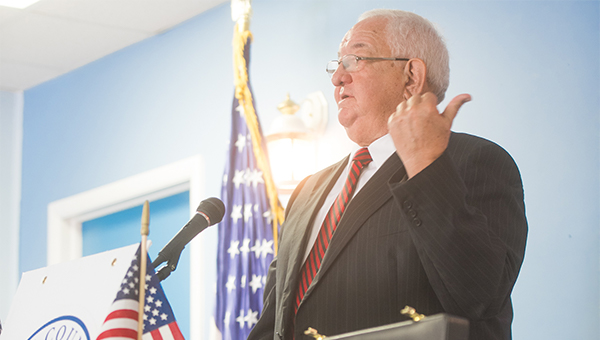 Messenger Photo/Jonah Enfinger Rep. Alan Boothe and Sen. Jimmy Holley were the guest speakers at Wednesday’s meeting of the Pike County Republican Women. The two elected officials representing Pike County updated attendees on what to expect during the upcoming legislative session. Above, Boothe addresses the crowd on his new position as chairman of the Rules Committee.

Boothe spoke to the roughly 50 people in attendance about his new job as chairman of the rules committee.

“The new job I have in the Legislature is a job I did not seek out,” Boothe said. “The Speaker asked to me take the position and I graciously agreed.”

Donna Horn, chairwoman of the Chamber’s legislative committee, said Boothe is a great fit for the role.

“I’ve never been happier than to hear that Alan Boothe had been appointed to the Rules Committee,” Horn said.

Boothe explained that every bill to be considered by the House first comes through the Rules Committee.

“I found I got a lot of new friends when I took this position,” Boothe joked.

The committee meets 30 minutes before the session starts each day to set the day’s calendar and then the House must approve the calendar.

Boothe and Holley also spoke about big issues that will be coming up soon, whether they’re dealt with in the regular session or a special session.

Boothe said that the general fund budget, education fund budget and Medicaid are all looming challenges for the state.

There are still a lot of questions around Medicaid with the shift of power in Washington D.C., Boothe said.

Holley spoke about the situation facing the state’s prison systems, which Boothe called “the 1,000 pound gorilla in the room.”

“Nobody wants to deal with the prison system, and hasn’t dealt with it for 40 years,” Holley said.

Holley explained that the Southern Poverty Law Center has filed multiple lawsuits against the state regarding the prison systems and the state has already lost one of them referring to noncompliance to the Americans with Disabilities Act.

Holley said attorneys aren’t confident in the state’s chances on the other two suits either, and said a fourth suit regarding facilities will be filed soon.

Angi Stalnaker also spoke to the attendees about a movement to get 34 states to pass resolutions supporting an Article V convention to consider establishing 12-year term limits for members of congress.  It would not limit a house member who has served 12 years from running in the Senate, however. “For a long time in Alabama, term limits were a bad thing,” Stalnaker said. “But with Sen. Jeff Sessions taking the attorney general position and Sen. Richard Shelby announcing this will be his last term, Alabama won’t have any seniority and that could be a bad thing for Alabama.”