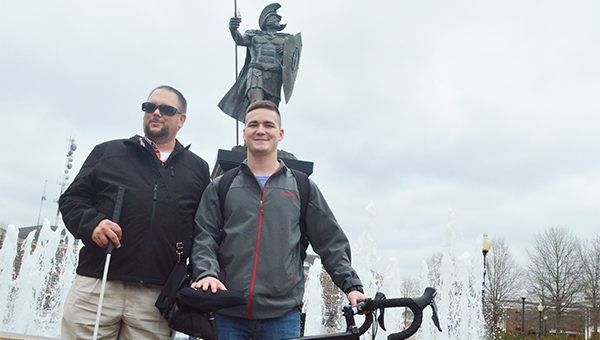 Ben Barnett, right, rode a bike across America in 2016 on a Journey of Hope. Later that year, he spearheaded a 24-hour bike ride to raise funds to replace an eSight reader for professor Joey Arnold, who’d lost his in a devastating house fire. When Barnett’s beloved bike was stolen, Arnold and his family returned the gift, raising funds to purchase a new bike. Today, the pair shares a bond of charity and hope.

In the summer of 2016, Ben Barnett decided to embark on a “Journey of Hope” across America to raise awareness for The Ability Experience, the national philanthropy that helps people with disabilities.

Barnett is president of the Pi Kappa Phi chapter at Troy University. The national fraternity sponsors the annual bike ride across America.

But that 60-day, 3,700-mile bike ride was only the beginning of a longer journey for Barnett and Troy professor Joseph “Joey” Arnold.

While Barnett was preparing for the Journey of Hope, Arnold was embarking on his own journey.

Arnold has a visual acuity of 20/800, which means that objects that most people can see clearly at 800 feet don’t become clear to him until they’re at 20 feet.

So at the beginning of 2016, Arnold’s mother, Nell Arnold, set out to raise money to secure an eSight, a device which improves his visual acuity to 20/60.

She did this by baking cakes – lots and lots of cakes. She said she baked 400 cakes in one week.

“It was a family effort and ended up being a community effort,” Joey said. “Jack is a small community, but everyone wanted to help, whether it was buying cakes or stacking layers. We didn’t expect it to take on quite the life that it did.”

The Arnolds originally thought they’d be using the profits from the cake sales to fund a barbecue to get more money in, but the community turned out so strongly that cake sales alone raised the $15,000 needed to purchase the eSight.

The device was a life-changer for Arnold.

“It’s amazing what the eSight allowed me to see clearly for the first time,” Arnold said. “My daughter’s faces, my wife, my family, things that you’d perceive on a daily basis but I wouldn’t catch.

“For example, we were able to go to a Montgomery Biscuits game and I could read player’s numbers on their jerseys from 20 rows up which would have never been possible.”

While Arnold was raising funds for his eSight, Barnett was going through a similar process to find funding for an item he needed to make his trek across the country: a bike.

“Journey of Hope is something I didn’t think was achievable,” Barnett said. “You have to buy the bike and plane tickets yourself and fundraise $5,500.

“I ended up buying the bike on a credit card and it cost $1,024.05. Right afterward, I called my dad and told him I bought the bike and the exact amount it cost.

“Ten minutes later, my dad called me back and told me that a guy had just come by that he had done work for in the past to pay him back. It was the exact amount of the bike to the penny. It gave me chills. I felt like God wanted me to go on this trip.”

Barnett said the trip was hard, especially since he had little time to train beforehand, but the experience was worth it in the end.

“It was a remarkable experience – life-changing actually,” Barnett said. “It’s hard to let someone else know in words the experience. You come together with 20 other brothers from around the country out in California and start the journey. Every night we stopped in a different town and visited people with disabilities, dancing with them, singing karaoke, playing wheelchair basketball; the impact we got to have just by spending a little bit of time with them was huge.”

While Barnett was away on his bike ride, Arnold experienced another high in his life: an offer to teach history at Troy University.

“To be honest, going back to 2012 I’d had several eye surgeries,” Arnold said. “I thought my time in the classroom was up, but after spending some time off, I realized I needed to be active.

“I’d always aspired to teach at the post-secondary level and the idea of teaching at your alma mater is something you hope for, but something you don’t really think about happening. I was elated at the opportunity.”

It was in one of Arnold’s history classes that Arnold’s and Barnett’s journey merged and became one.

Arnold said that Barnett was a good student, one of the students that hung around after class sometimes to chat and ask questions; but that was the extent of Arnold’s relationship with Barnett.

That all changed when Arnold lost his home, and his eSight, in a fire.

His insurance would cover the house, but the eSight was seemingly lost forever.

“I got a call about 8:30 that morning that we lost our home and everything in it,” Arnold said. “And we lost not only our home, but a device that I now saw as irreplaceable was gone as well.”

When Barnett heard what had happened, he wanted to find some way to help.

“I thought there had to be something that we could do,” Barnett said. “After class, I told him about our philanthropy and that I thought we could do something for him and his family. I could see how much pain the fire brought.”

Barnett decided to hold a fundraiser for Arnold to raise the $15,000 necessary for the eSight. Part of that fundraiser included Barnett doing a 24-hour stationary bike ride to draw attention and donations.

Arnold came to the event and was amazed by the compassion shown by the students and others attending.

“It was amazing,” Arnold said. “My wife and I went up and spent some time with the people that were involved with the fundraising event. Ben was on the bike for 24 hours. I had the opportunity to speak with several students with visual impairment and talk to them about my experiences and tell them about the eSight.”

Between selling burgers and baked goods, holding a raffle and Barnett’s 24-hour bike ride, the Troy students were able to raise the money to replace Arnold’s eSight.

“It was a very beneficial event all around. It was good for Ben’s organization and for those other students we got to talk to and, of course, to our family. It touched our heart that people were willing to take time out of their schedules to do that.”

Arnold would receive his eSight in early December, around the same time he and his family were able to move into a new house.

“It was like Christmas had come early,” Arnold said. “It really was. Honest to God that’s the only way I can describe it.”

While Arnold got back something that was important to him, Barnett lost something.

The night after the fundraiser, someone decided to come onto Barnett’s porch and steal his bike.

“They took a part of me when they took away that bike,” Barnett said. “I spent a lot of hard time on that bike figuring out who I was. It helped me travel across the country and touch people. I wanted to pass that down to my grandkids and tell them about it one day. I didn’t know how to react or what to say. I was in a panic.”

When the Arnolds heard about what happened, Nell said they immediately felt the need to help, but gave police time to attempt to track down the bike and the thief. However, when they checked in months later and the bike had still not been recovered, Nell went back to work baking cakes, this time to raise money for a bike for Barnett.

“After he helped us, I felt immediately like we needed to do something,” Nell said. “I knew that we’d raise some money in the close-knit community of Jack and that the Lord would help us do it.”

The family was able to raise the money and give Barnett a new bike in January.

“He and his family are just a huge blessing to me,” Barnett said. “Even though they’d lost so much they just wanted to give back still. It was an overwhelming feeling.

“I couldn’t believe it. I just felt so unworthy for God to use someone else to provide me with this bike so my question to God is ‘What do you want to me do now?’”

Although Barnett is no longer in Arnold’s class, the two continue to stay in touch and will have a special bond for a lifetime to come.