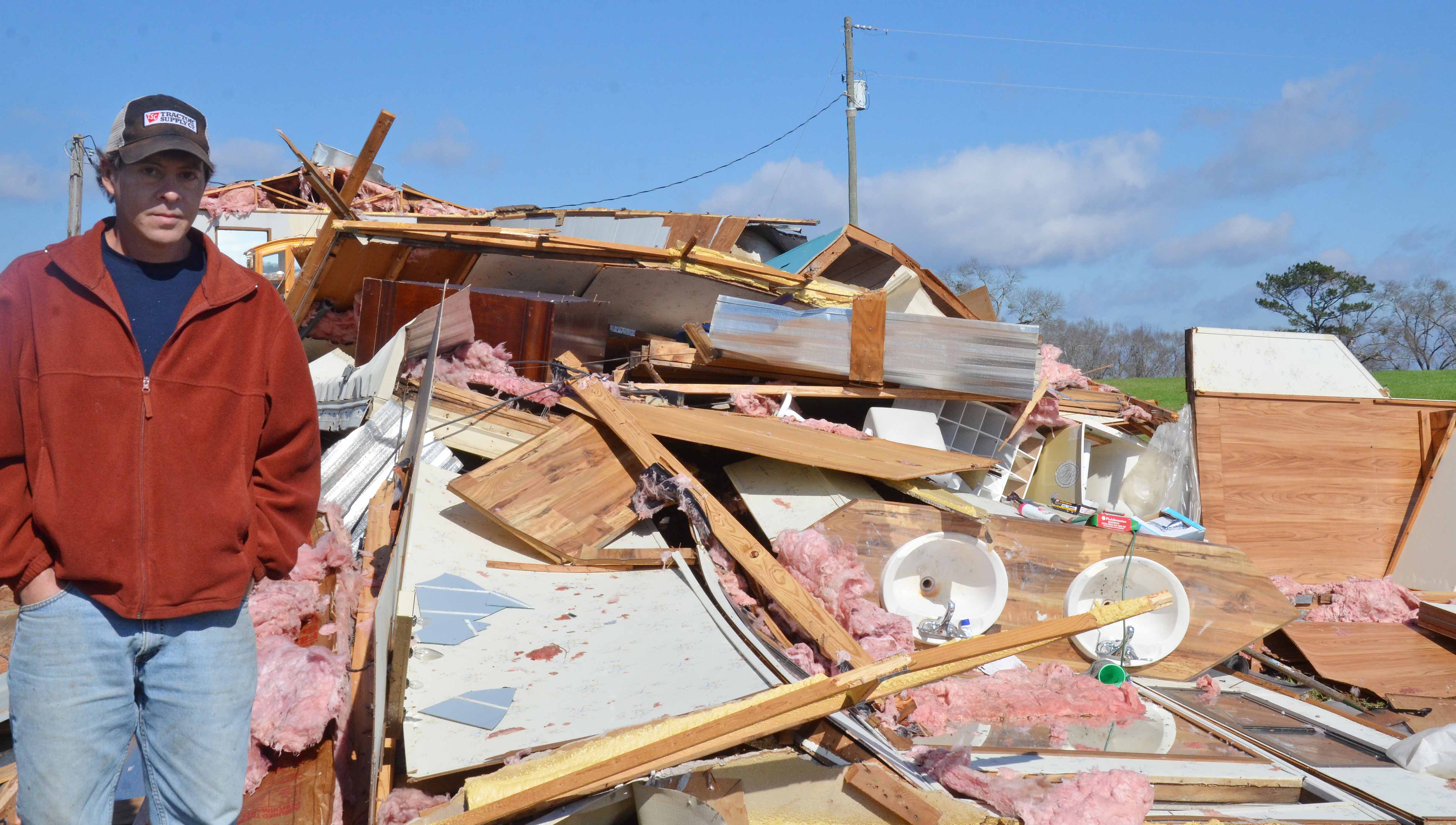 Adam Kelly, above, stands before what remains of the home he shared with his wife, Laura, and their children. Kelly said a call from Mama alerted them to seek safety just minutes before a tornado hit. The storm was part of a dangerous system that swept through Pike County early Saturday morning, leaving a trail of damage in its wake. Inset below, Richard Adam Taylor stands in front of his A Street home in Troy, where winds toppled a massive tree, sending it through the roof and into his bedroom.

In all probability, a call from “mama” saved the lives of Laura Gray and Adam Kelly. The couple is sure of that.

Their mobile home at Livingston’s Crossroads was cut in half by a Category 1 tor-nado that hit the area near the Banks community around 8:30 Saturday morning.

Pike County EMA Director Jeanna Barnes confirmed on Monday that an EF1 torna-do ripped through the county on Saturday morning, carving a path from the Goshen area all the way to Barbour County.

Five minutes before the tornado hit, Laura was in bed and Adam was watching the morning news and weather. Their initial warning of a tornado came through their phone alarms.

Almost immediately Laura got a call from her mom, Betty Sneed. “Get out now!”

The urgency in Sneed’s voice was all it took for the couple to “get out.”

“We jumped in the car and headed for the dairy barn, which is just up the hill,” Laura said. “I was looking in the rear view mirror and I could see the tornado coming across the field. It was dark cloud of rain that was blowing sideways. It kept coming like it was after us.”

The couple made it to the Tioga Way Dairy where Adam worked for 21 years be-fore it closed a year ago. They ran to the barn but the wooden door would not open against the fierce wind.

“For a few seconds, I didn’t think I could get the door open, but I kept pulling and it opened,” Adam said. “We went in the milk room but I was afraid the glass would blow out so I grabbed Laura and we went in the parlor.”

Adam was all too familiar with the parlor where he had milked cows for two dec-ades. “I knew it was as safe a place as we could be,” he said.

The couple huddled inside the dark, dank barn. They stood helpless as the ply board shutters were sucked almost out of the building by the wind, thinking they might be pulled out as well.

“Praying was all we could do,” Laura said, wiping away tears at the remembrance of those harrowing moments.

“From the time we left home until it hit was about five minutes,” Adam said. “The worst of it lasted about maybe a minute. When things finally quieted down. We went back into the milk room. The window was fogged up so I wiped it off and looked down toward the house. ‘It’s all gone,’ I told Laura. ‘All we’ve got is gone.”’

Their mobile home was demolished. The bed where Laura had been only minutes before the tornado hit was crushed under the weight of the debris. There was little left of what had been home.

“I just stood and looked,” Laura said. “I stood for hours. I was in shock.”

The couple had lost a lot of material things, but when they think of what could have happened, they know they were blessed.

As it often is with tornadoes, amid the rubble and the destruction, the china cabinet stood like a lonely sentry without a crack in the glass doors and not one piece of glassware inside broken.

John Dick Barr III had six chicken houses on the property but all were closed. The Number 6 house was completely destroyed and several others were heavily damaged. Si-los were toppled and rolled and sheets of metal siding and roofing dotted the fields like clover on a summer day.

“This tornado was a category one,” Laura said. “The winds were about 80 miles per hour or better. It caused all this. I can’t imagine the devastation that is caused by stronger tornadoes. If it had not been for my mother’s call, I don’t know what would have hap-pened to us.”

The Banks community was just one of the areas subjected to the tornado’s path, and Barnes said there may have even been more than one tornado.

“We were really lucky considering some of the heavily-populated areas that were hit,” Barnes said.

Some of those areas that were hit include parts of Downtown Troy, Troy University and the Country Club Road Area.

One small street, simply named “A” Street, off of Corman Avenue was also in the tornado’s path, where it knocked a tree onto the home of Richard Taylor Adams.

Adams was sitting in his living room when he began to heard a snapping sound outside his home on A Street.

“I was actually up inside my living room and I kind of had a feeling that– I don’t know why, thank God– but, I started to hear that snapping sound when a tree begins to fall; and I looked outside and sure enough, I see it start leaning towards that side and I’m just thinking ‘Oh no.’ And sure enough, just…” Adams said, motioning to the large tree be-hind him that ripped a massive hole in the left side of his house. “Right through the house… That’s where my bedroom is.”

The county came out of the weekend storms relatively unscathed compared to what what happened to surrounding states.

Georgia reported 15 deaths Sunday, four people died Saturday in Mississippi. and a wom-an in Florida died after a tree crashed into her home when the storms passed through.