Storms cause damage across Pike County 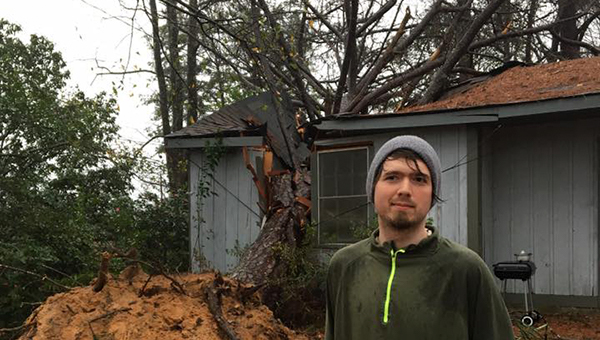 Richard Taylor Adams was a victim of Saturday’s severe weather as strong winds caused a tree to fall on his house.

Richard Taylor Adams was sitting in his living room when he began to heard a snapping sound outside his home on A Street.

“I was actually up inside my living room and, uhh, I kind of had a feeling that– I don’t know why, thank God– but, I started to hear that snapping sound when a tree begins to fall and I looked outside and sure enough, I see it start leaning towards that side and I’m just thinking ‘Oh no.’ And sure enough, just…” Adams said, motioning to the large tree behind him that ripped a massive hole in the left side of his house. “Right through the house… That’s where my bedroom is.”

Adams was just one of the people in Pike County affected on Saturday morning by strong storms.

The National Weather Service in Birmingham issued a Tornado warning for the county at 9 a.m. and the damaging winds ripped through parts of Pike County from roughly 9:15 to 9:45.

The fact that none of the county’s 18 sirens were functioning compounded the problem.

Pike County EMA Director Jeanna Barnes said that they believe they have figured out what the problem is and are hoping to have the sirens fixed in time for the second wave of severe weather tonight that will hit tonight from approxiamtely 11 p.m. to 3 a.m.

“We think it’s a problem with our repeater,” Barnes said. “We’ve got somebody en route now to see if we can get them back online before tonight. We can’t guarantee that they’ll be up and running tonight though, so everyone needs to make sure that they have multiple methods that can wake them up.”

Barnes said that tonight’s bout of severe storms should be the end of this sever weather event. 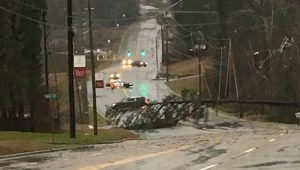 A tree fell near George Wallace Drive, blocking all lanes of traffic.

There have been several reports of fallen trees and downed power lines throughout the county as a result of the storm.

Banks Fire received a call at approximately 9:36 a.m. that a vehicle struck a tree that had fallen onto the roadway on Butter and Egg Road.