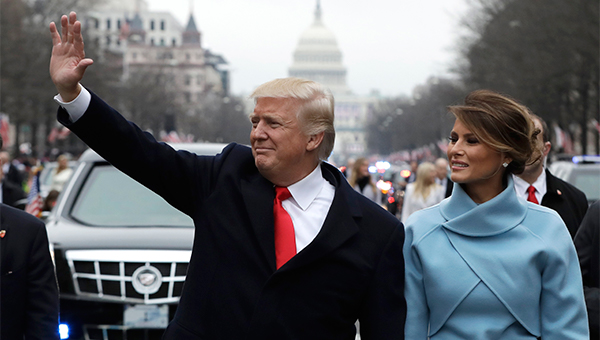 WASHINGTON (AP) — Pledging emphatically to empower America’s “forgotten men and women,” Donald Trump was sworn in as the 45th president of the United States Friday, taking command of a riven nation facing an unpredictable era under his assertive but untested leadership.

Under cloudy, threatening skies at the West Front of the U.S. Capitol, Trump painted a bleak picture of the America he now leads, declaring as he had throughout the election campaign that it is beset by crime, poverty and a lack of bold action. The billionaire businessman and reality television star — the first president to have never held political office or high military rank — promised to stir a “new national pride” and protect America from the “ravages” of countries he says have stolen U.S. jobs.

“This American carnage stops right here,” Trump declared. In a warning to the world, he said, “From this day forward, a new vision will govern our land. From this moment on, it’s going to be America first.”

The crowd that spread out before him on the National Mall was notably smaller than at past inaugurals, reflecting both the divisiveness of last year’s campaign and the unpopularity of the incoming president compared to modern predecessors.

Demonstrations unfolded at various security checkpoints near the Capitol as police helped ticket-holders get through. After the swearing-in, more protesters registered their rage in the streets of Washington. Police in riot gear deployed pepper spray and made numerous arrests after protesters smashed the windows of downtown businesses, denouncing capitalism and the new president. At least one vehicle was set afire.

Short and pointed, Trump’s 16-minute address in the heart of Washington was a blistering rebuke of many who listened from privileged seats only feet away. Surrounded by men and women who have long filled the government’s corridors of power, the new president said that for too long, “a small group in our nation’s capital has reaped the rewards of government while the people have borne the cost.”

His predecessor, President Barack Obama, sat stoically as Trump pledged to push the country in a dramatically different direction.

Trump’s victory gives Republicans control of both the White House and Congress — and all but ensures conservatives can quickly pick up a seat on the closely divided Supreme Court. Despite entering a time of Republican dominance, Trump made little mention of the party’s bedrock principles: small government, social conservativism and robust American leadership around the world.

He left no doubt he considers himself the product of a movement — not a party. Trump declared his moment a fulfillment of his campaign pledge to take a sledgehammer to Washington’s traditional ways, and he spoke directly to the alienated and disaffected.

“What truly matters is not which party controls our government, but whether our government is controlled by the people,” he said.