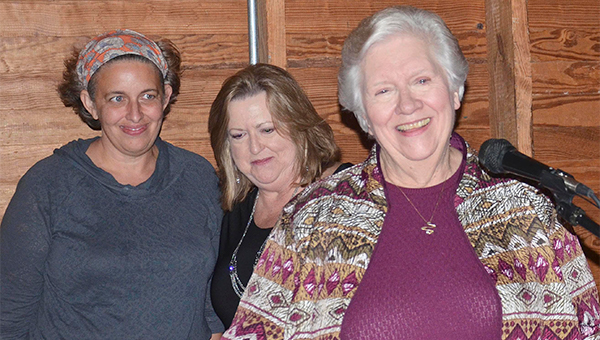 The Brundidge Business Association honored the late Jim Roling and former Brundidge Mayor Jimmy Ramage during its annual banquet this week. Above,, Angie Roling accepts the award in memory of her husband.

The BBA most often recognizes businesses that have made outstanding contributions to the business and industrial community. However, this year, the BBA board chose to honor James T. Ramage III, who served Brundidge as its mayor for 40 years, and the late Jim Roling, the voice of WTBF-Radio, who was a strong supporter of the Brundidge business community and the community as a whole.

In introducing Ramage, Cot Wallace said the former mayor had, three loves – his family, Alabama football and the City of Brundidge.

“Every decision that Mayor Ramage made was in, what he thought, the best interest of Brundidge,” Wallace said. “When he retired from office in 2016, he left the city in fine financial shape.”

Wallace said, with Ramage leading the way, Brundidge created and maintained an enviable business climate for a small town and is a good place to live and to work.

Ramage said he had a good teacher in the late Robert “Boss Hog” Barr in whose footsteps he followed.

“I learned from Robert that, in government, if you don’t know ‘somebody,’ then get to know somebody that knows somebody,” Ramage said. “What we have done in Brundidge has been a team effort. For me, it’s been a labor of love. I did it for all you. It’s been a lot of fun.”

Angie Roling expressed appreciation to the BBA for honoring her husband and promised to come back “and tell some stories.”

Jim Roling was a great storyteller and a great story himself. And, speaking as if for him, Angie Roling shared words of advice on life’s journey. “Know what to do and why and how” and things will fall into the right place.

Jim Byard, Jr., director of the Alabama Department of Economic and Community Affairs, was the keynote speaker for the BBA Banquet.

As a three-term mayor of Prattville, Byard said he and  Ramage have much in common, except he could only boast of Prattville’s three state football championships during his term in office while Ramage topped him with five in his city.

Byard said for a city to be successful it must have good leadership and commended the BBA on the role it plays in the city. He also had words of praise for the city’s governing body and for the school system and the teachers that are making a difference in the lives of children and young people.

He shared the meaning behind a coin with only the letter “D” on one side and the letter “B” on the other.

“The letter ‘D’ is a reminder to ‘Do’ something for somebody every day,” he said. “The letter ‘B’ reminds us to ‘Be’ present in the moment. God gives each of us the same amount of moments in every day.”

Byard cautioned the audience to “pay attention” to their moments.

“Those moments may be used to alter your life or the life of someone else,” he said.

Byard said each town is special and what makes Brundidge special are “the people in this room.”

He reminded the audience that Brundidge is not Fairhope, Alabama. It’s Brundidge and challenged the community leadership to, as Roling said, know what to do and why and how and then, do it.

The BBA also honored members who made specific contributions to the association during the 2016-year, Homer Homann, Delatha Mobley, Ernestine Beecham, King Isaac and Lamar Steed.

Outgoing BBA President, Isabell Boyd turned the gavel over to Jennifer Garrett who joined Boyd in thanking those in the audience for their contributions to Brundidge and for their support of the BBA.

The BBA meets at 5:30 p.m. on the second Tuesday of the month at 5:30 p.m. at the First National Bank Annex on South Main Street in Brundidge. New members are always welcome.