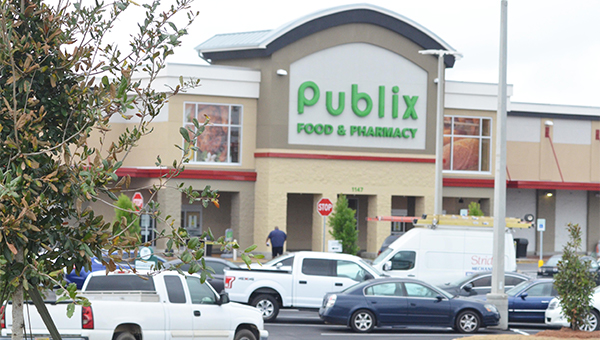 Publix will open at 8 a.m. on Saturday after a ribbon cutting ceremony at 7:45 a.m. Mayor Jason Reeves said the store has been something that residents have asked about for a long time, and its arrival can finally end the long wait. However, the opening is just the beginning for the Park Place development, which already has three more stores signed on to fill the empty spaces connectd to the grocery store.

After years of waiting, the Pike County community will finally be able to shop at the Troy Publix on Saturday after an official ribbon cutting ceremony at 7:45 a.m.

“We are extremely excited to be in the beautiful and hospitable city as Troy’s newest neighbor and look forward to serving this growing community with the services and products our customers and their families deserve” said Dwaine Stevens, media and community relations manager for Publix.

The Park Place development which houses Publix has been in the works for over two years now and the community has been clamoring for a Publix for even longer, according to Mayor Jason Reeves.

The Enzor Road Connector Project, which opened up on December 30, played a crucial role in the development as well, as Reeves said officials were asked to have the road open to the public by December 31, 2016. The city beat the target by a day and Reeves said the Publix opening was actually able to move ahead of schedule.

“They were actually looking at a mid-February target originally, so they’re actually opening a few weeks ahead of schedule,” Reeves said.

Reeves said that the opening of the store will be satisfying for those who worked on the project and the citizens who have been anxiously waiting for the store to arrive. Reeves also said that the store’s arrival will help in upcoming recruiting efforts as well.

“I think one thing it does for the community is send a message that Troy is viable economically for something like Publix to come in, and it will certainly help us with additional businesses as we try to recruit more retail, so I think all those things will help a great deal,” Reeves said. “It will bring to fruition something that have people have looked forward to for many years. It’s been a long and complex process, but there have been a lot of people that have worked really hard on it and I’m appreciative of that. The community seems to be excited about and it and we hope it will be beneficial for present and future retail.”

The 45,600 square-foot Publix store will offer the traditional grocery, meat, produce, dairy and frozen food departments, and will have a pharmacy, bakery, deli, a fresh seafood department and a floral department. The store will employ approximately 189 people, with at least 136 of those employees coming from the local community.

Publix is privately owned and operated by its 189,500 employees, with 2015 sales of $32.4 billion. Currently Publix has 1,136 stores in Florida, Georgia, Alabama, Tennessee, South Carolina and North Carolina. The company has been named one of Fortune’s “100 Best Companies to Work For in America” for 19 consecutive years.