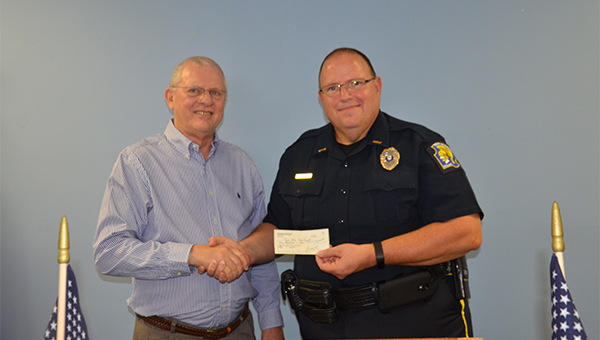 Troy Exchange Club President Jerry Beckett presented Troy Police Chief Randall Barr with a check for $500 at the club’s Thursday meeting. The funds will be used to purchase school crossing signs. Barr was the guest speaker at the luncheon meeting.

Troy Police Chief Randall Barr was the guest of the Troy Exchange Club Thursday. He was invited to speak to the club and was also available to accept a $500 donation in support of the TPD’s Public Safety Program.

Barr graciously accepted the check, which he said will be used to purchase school crossing signs.

Club President Jerry Beckett said Exchange Club members appreciate the dedication and commitment of the Troy Police officers. The donation was only a small token of thanks for their service.

In turn, Barr said it was an honor for him to speak before the group of community-minded citizens and to talk about a career in law enforcement he never imagined.

“My dad sold insurance and I thought I would follow in his footsteps,” Barr said.

As a young boy, Barr had hands-on experience in sales.

“My dad had a heart attack and was disabled but he would not sit around idle,” he said. “He was a salesman.”

So the elder Barr became somewhat of a truck farmer and would transport produce between Troy and Chilton County with his son in tow.

Barr, laughingly said, door-to-door salesmen were not all that popular, even little boy salesmen.

For the initial sale’s pitch, the young salesman knocked on the door.

If he were turned down, his dad would begin talking to the “customer” from the truck.

Engaged in conversation, the customer would amble out to the truck and soon be talked into buying four baskets of produce from the seasoned salesman.

As a university student, Barr soon changed his major from business to criminal justice. He worked three jobs to put himself through college. He graduated from Troy State University in 1989 and went to work for the TPD in May 1991.

“I didn’t know what God had in store for me,” Barr said.

“I didn’t think I would be chief anywhere. But I am honored to be the chief of the Troy Police Department and to represent such a fine department. There is nowhere else I would rather work.”

Barr highlighted some of the changes in the Troy Police Department during his tenure.

When Barr was a young officer, the officers shared cars that stayed on the road 24 hours a day. Today, each officer has a “take home car” and he/she is responsible for the maintenance of that vehicle.

Paper and pen reports have given way to computers and in-car and body cameras now help to capture the truth of a situation.

“In 2009, the Troy Police Department got in-car cameras,” Barr said.

“In 2013, we got body cameras that do protect the truth and that truth protects our officers.”

Barr said drugs and drug distribution are related to most everything his department does.

He cited recruitment and retention of officers is a big challenge for his department.

“I hire only the best,” Barr said. “I will not hire somebody else’s problem.”

He added that law enforcement is better today than it has ever been but is generally less respected.

“But we are fortunate here in Troy,” he said.

“The Troy Police Department has our community’s support and great support from our mayor and city council. We are very appreciative of the support we receive.”