THE GREATS: Fans turn out for songwriters’ showcase event 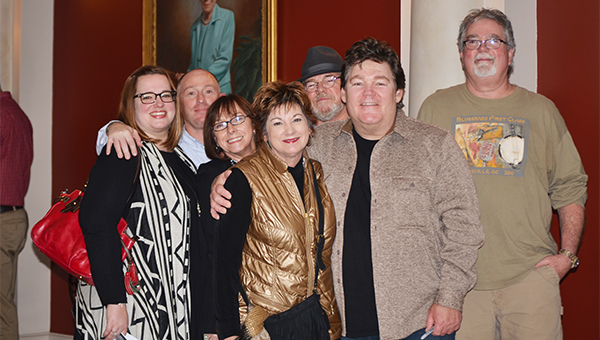 The family of the late Lester Sanders, who owned and operated Lester’s flat in Pike county for many years, attended the Troy Arts Council’s Songwriters Showcase on Friday night. Singer and songwriter Marty Raybon, center front, and his dad and brothers played at Lester’s Flat in his early days before he joined Shenandoah.

The Troy Arts Council presented “The Heart Behind the Music” Songwriter’s Showcase at the Claudia Crosby Theater on the campus of Troy University Friday night.

“Of course, we’d like to have 500 people in the audience at every event but we were very pleased with the attendance for ‘The Heart Behind the Music’ concert,” said Joel Williams, Troy Arts Council president. “We had a good crowd and an enthusiastic audience and the show was outstanding.”

“The age range of the audience was from the very young to senior adults,” Williams said. “Those guys have been around for 40 years and their music is still popular. Old guys like me remember their music as young guys and that same music still resonates with young people.”

Williams said the trio of singer-songwriters is a class act.

“They were personable on the stage and then came out and signed autographs, had photos taken and talked with everybody for 30 minutes or more,” he said. “It was a great show and those are three great guys in addition to being award-winning performers.”

Kim May and her family attended the concert to rekindle an old friendship with Marty Raybon but came away as fans of Coley and LeBlanc as well.

May’s dad, the late Lester Sanders, owned Lester’s Flat on Highway 29 for years. Raybon, his dad and brothers had a band called The American Bluegrass Express and often played at Lester’s Flat.

“He, his dad and brothers had a good band and everybody enjoyed their music. Later, Marty started playing and singing with Shenandoah and played all around the country. Shenandoah won all kinds of awards and he was the band’s lead singer.”

May said the last time she saw Raybon was in 1997 at the Hank Williams Festival in Georgiana. She took her dad to hear Raybon.

“Marty and my dad were good friends,” she said. “He thought a lot of Marty as a singer and as a man.”

As a young boy, May’s son, Tyler, played with Raybon who always had time to encourage young musicians.

“The Heart Behind the Music” Songwriters Showcase brought people of all ages to the Claudia Crosby Theater Friday night.

“You can’t not like music that comes from the heart,” she said. “All three of those singers sang from the heart. It was a great show.”