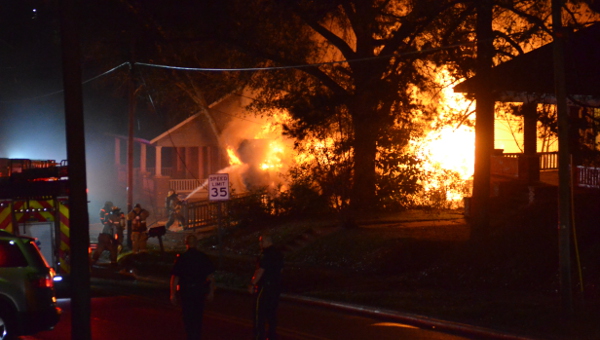 Troy firefighters worked tirelessly to battle the blaze on Saturday night, but were unable to save the life of former Troy councilman Jose Henderson. Henderson served 12 years on the council and also served as the director of Headstart for OCAP.

Former Troy Councilman Jose Henderson passed away on Saturday when his home on North Three Notch Street was engulfed in flames.

Troy mayor Jason Reeves, who served on the city council with him for eight years from 1996 to 2004, said that Henderson was a good friend whose legacy of service will live on after him.

“Jose was a dear friend of mine for over 20 years,” Reeves said. “He was like a big brother to me and was a great help to me as I got started in government.

Reeves praised Henderson’s heart for helping others, noting especially his work with the Headstart program.

“That continued through all of his life,” Reeves said. “Even when he was a young man, he helped integrate the public schools in Troy. The last time I saw him he came to ask me about helping somebody else. I appreciated that about him so much.

“On a personal level, I’ll miss him a great deal. It’s a very sad day for Troy. We can all appreciate what he did for the community.“

District 5 Councilwoman Wanda Moultry served with Henderson both on the city council and at OCAP and said he had a big influence on her life.

“He was an advocate for all people, especially little children,” Moultry said.

“He was a mentor. He was a genuine individual. He was not selfish and he would give you the shirt off his back. I thank God for having him in my life as my brother at church, at OCAP and as a city leader.”

Moultry said Henderson’s work with the 3 to 5 year olds with the Headstart program was one of a kind.

“There was none other like his style of leadership because he always had a positive influence on all the children. He made sure they got a well-rounded, comprehensive curriculum that gave them the edge they needed to enter the public school system.”

Former councilman Charlie “Sarge” Dunn echoed the remarks of his former colleagues when talking about Henderson.

“I knew Jose for probably over 25 years,” Dunn said. “He was a very intelligent and friendly man.”

The Troy Fire Department responded to the call that Henderson’s home was on fire at approximately 7:26 p.m. on Saturday.

Henderson’s body has been turned over to the Alabama Department of Forensics Science.