STRIKING A CHORD: Hagler’s exhibit draws on experiences of childhood 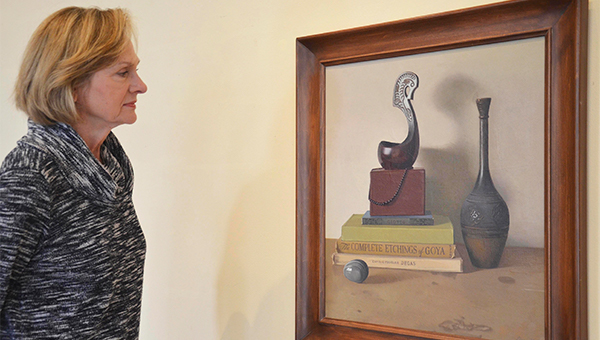 Dale Calhoun spent time viewing Elana Hagler’s “The Ephemeral and the Concrete” exhibit that opened at the Johnson Center for the Arts on Wednesday and will run through February 25. Hagler was born in Tel Aviv, Israel and immigrated to the United States at age five.

The Johnson Center for the Arts in Troy has become well known for its outstanding exhibitions. And, that tradition continues with Dr. Elana Hagler’s  “The Ephemeral and the Concrete: Paintings and Drawings” which opened Wednesday and will hang through February 25 in the JCA upper level galley.

“You cannot view Elana Hagler’s artwork without be affected by it,” Pritchett said. “You can’t help but be moved by it.”

Hagler was born in Tel Aviv, Israel and immigrated to the United States at the age of five.

“Elana’s mother died when she was very young and she was raised by her grandparents who were survivors of the Holocaust,” Pritchett said. “Together they journeyed from Siberia to Israel. One of the Elana’s paintings is of a wooden doll that she carried in her pocket during their journeys.”

Hagler’s paintings are depictions of the different journeys in her life interwoven with her faith. The portrait of the Rabbi at her temple of worship won the Montgomery Art Guild Award.

“‘The Ephemeral and the Concrete’ exhibit features images that stay with you long after you leave the gallery,” Pritchett said.

Hagler’s love for painting and drawing started at a young age when many of her classmates would take time to sit for her.

Hagler said within her work she strives to embody a felt experience that can be communicated to others.

“I attempt to encounter the visual world in a way that is informed by thousands of years of the creation of art objects and yet, at the same time, is somehow fresh,” she said.

“I have always been intensely interested in people, their likenesses, their experiences and the attempt to capture and distill their essence. My fascination with understanding people on a deeper level led me to major in psychology in addition to studio art.”

Hagler said she is enthralled by the greatest and most mysterious examples of portraiture in the past, including the work of Degas, Velazquez, Goya and Pontormo, as well as the Egyptian Fayum portraits and ancient Roman frescoes.

“In this day and age of constantly being confronted with a multiplicity of flickering images, what a profound experience it is to truly see and be seen,” Hagler said.

Hagler’s still-life paintings hold “layers of meaning” for her.

‘They are formal inventions, engaged in the play of opposites including the juxtaposition of the intimacy of familial objects and books with the monumentality of architectural construction,” she said. “ At the same time, the objects are both vessels of memory and stand-ins for those who made the deepest marks upon my life.”

For Hagler, painting landscapes is her path to being fully present in the moment.

“I seek out the colors and harmonies and formal rhythms, which play through the world like underlying melodies,” she said. “The world has had more than enough of sorrow. I seek solace through the pursuit of my idiosyncratic sense of beauty.”

Hagler received a Bachelor of Arts degree in both studio art and psychology from Brandeis University in Boston. She continued her studies for two years at the Master Class of the Jerusalem Studio School and in Umbria, Italy. She then received her Master of Fine Arts from the Pennsylvania Academy of the Fine Arts in Philadelphia.

Hagler has won multiple prizes in painting and drawing and has exhibited her work across the United States and internationally. She has taught fine art at Cornell College, the Delaware College of Art and Design and at Swarthmore College. She lives and teaches in Montgomery and is a staff writer for the popular art blog Painting Perceptions.

The lower gallery of the JCA features two African-American artists in a duo show. The show features artists on opposite ends of the spectrum. Debra Riffe is a highly acclaimed wood- and linoleum block artist with 30 years of experience while Belinda Harrison is just beginning as a professional artist.

Riffe is featured in “I learnt to sing a glad new song.” Harrison’s exhibit is titled “Varieties.”

The Johnson Center for the Arts hours are from 10 a.m. until 5 p.m. Wednesday through Friday and until 3 p.m. on Saturday. Admission is free.