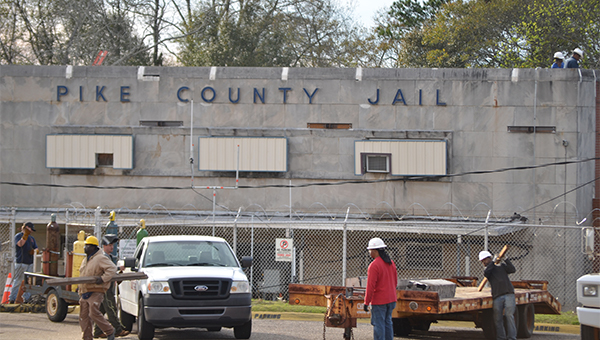 While the existing and outdated Pike County Jail is undergoing renovations to stabilize the structure, county officials are in the early steps of a feasibility study to explore the possibility of constructing a new jail facility. Officials are expected to discuss the project at the next county commission meeting.

The Pike County Commission has reported that ii is working on crafting a jail feasibility study request as the first step in the long process of potentially constructing a new jail.

The commission moved to send out the proposals after learning from the USDA that counties must have a feasibility study conducted before the department can even entertain helping to fund the project.

“We’re still in the process of constructing the request for proposals,” County Administrator Harry Sanders said on Friday. “These will go out to third part entities to study the local economy, what size the jail would need to be and several other questions.”

Sanders sent a draft of what the county has so far to give further insight into what the request is asking these third-party companies to do.

The drafted purpose of the request makes clear that “the report writer is expected to fully disclose and analyze all significant factors which will likely have a favorable or adverse effect on the financial success of the proposed facility. This is not meant to be an ‘all inclusive’ list, any additional areas of need and/or concern should be addressed in this report.”

The drafted request addresses three areas of concern: assessing the existing facilities, assessing the needs that would need to be met for a proposed facility and financial information.

The assessment of the existing facilities requests that the report writer “explain current capacities, rates of usage, activities, suitability for continued use, alternate usage, deficiencies in services, staffing, physical conditions, and any other pertinent information.” The commission is requesting even more detailed study of what a proposed new jail would need.

The proposals ask the report writer to include explain and describe what size the jail would need to be to meet the current and future needs of Pike County, potential locations, potential incorporation of a juvenile detention center, the necessary construction and renovation and the need for the facility.

The final section on the draft deals with financial information, asking the report writer to “explain all assumptions underlying the expected demand, use, and projections of financial data, such as change in usage, all income and expense, rate structure, depreciation life and method, and description of long-term debts.”

Sanders said that the process will be updated again at the next meeting of the Pike County Commission on Monday, January 23.

The meeting will be held upstairs at the Pike County Health Department with the work session beginning at 5:15 p.m., followed by the regular meeting at 6 p.m.