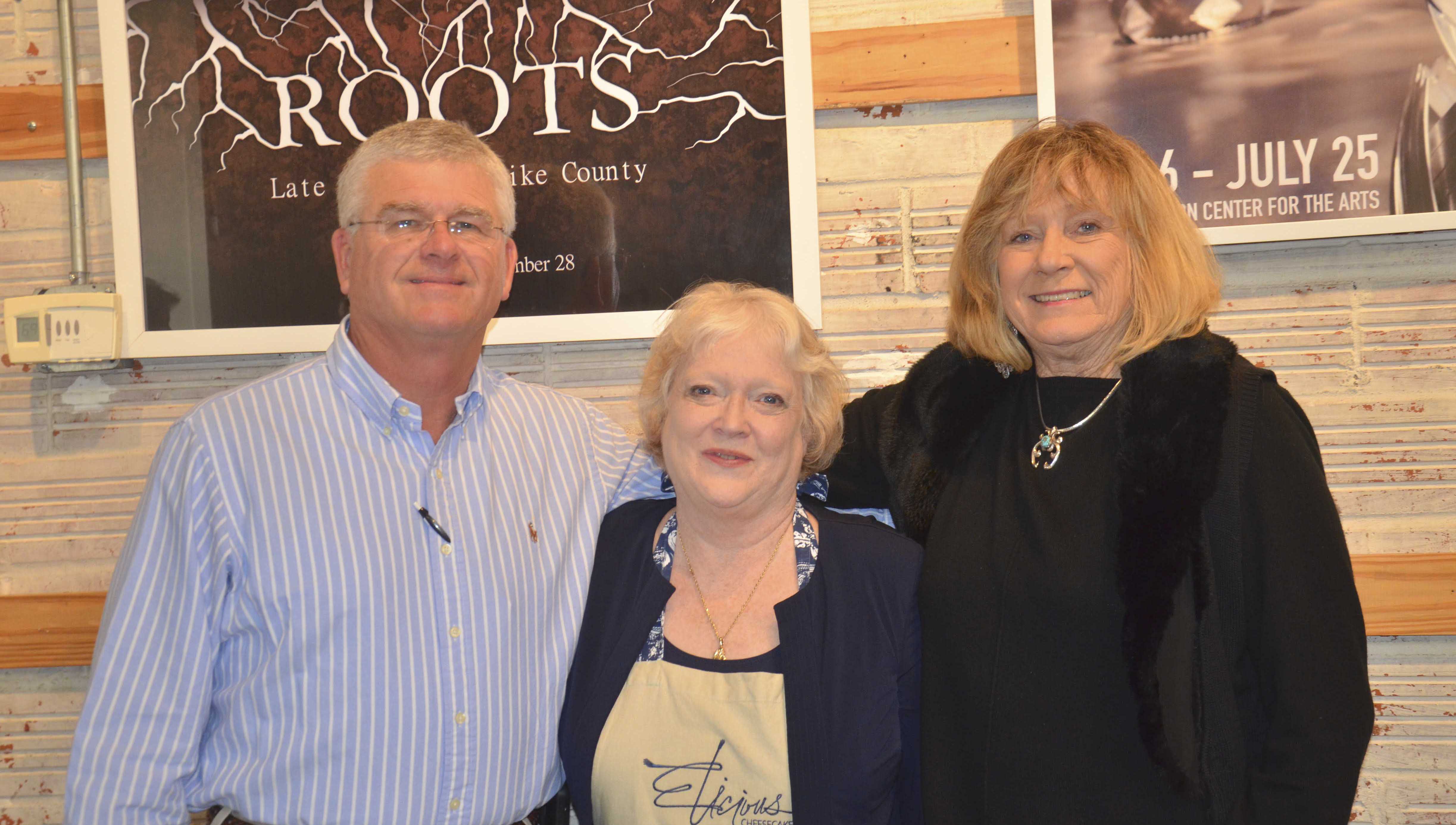 David Helms, The Home Gallery; Edith Synco, Elicious; and Mo Caraway, Collier’s on Main shared their stories of how their retirement years turned into new careers at the Female
Factor at The Studio Wednesday.

The Female Factor Wednesday at The Studio in downtown Troy was a celebration of the New Year and the opportunity for all women to become “a New You” in the New Year.

The program featured three retirees who have embarked on new careers and have become New You’s.

David Helms, Edith Synco and Merlene “Mo” Caraway were the program guests at the ladies’ luncheon. Each had a story to share about how they retired, not the to rocking chair, but to a new phase in their lives that they would never have imagined.

Helms is a retired educator, having taught 31 years in the school systems of Pike County. He retired in 2012 but continues to teach online classes through Troy University.

It seems logical that he would remain involved in education. But that’s not Helms only post-retirement venture. He has gone to work with his mother-in-law and his wife in the furniture business in Troy.

“When I retired, I was told to retire ‘to’ something, not ‘from’ something,” Helms said. “It didn’t take me long to understand that. My mother-in-law, Georgia Ziglar, needed help at The Home Gallery with the ‘rearranging’ of a warehouse. She is the most caring and giving person I have ever known and we have a great relationship and that’s what life is all about – relationships.”

Helms said working with his mother-in-law and his wife is a blessing and it’s an opportunity for him to be involved with the community and to spend his retirement doing something worthwhile.

“I worked with the late Betty Wagoner at CHHS and she taught me about giving back. It is a blessing for me to have something to do and with those I care about and in a community I care about.”

For Edith Synco, her New You is far different from her old you, at least when it comes to careers. She began her career with Alfa Insurance in Brundidge and Troy in 1978 and was promoted to Alfa’s home office in 1990. She worked there until her retirement in 2012.

When her daughter got married, cheesecake was served at the reception. Synco took note. She enjoyed reading cookbooks and became intrigued by the many ways and techniques of preparing cheesecakes and the many different flavors of the delicious dessert.

“I come from a family of cooks but I never, in a million years, would have believed that I would open a ‘cooking’ business,” she said.

But Synco began experimenting with cheesecake recipes, changing this and that, to make the recipe her own and people began to notice.

“Different ones began to say that I should market my cheesecake and I’d say, ‘Ha! Ha!’’ Synco said.

Synco said God pushed her out of her comfort box and into a workplace she would never have imagined. On April Fool’s Day 2013 Elicious became a reality. Synco is now enjoying a job with a new flavor and she couldn’t be happier to be out of the box as a New You.

“Mo” Caraway is the owner of Collier’s on Main in Brundidge, an upscale restaurant for a small town.

Caraway was a food service broker for 17 years and traveled across the Southeast with her job. She didn’t exactly retire from the food service industry; she just shifted gears.

Caraway said the decision to open a restaurant was not made with thoughts of getting rich but to support the town of Brundidge where her husband, Chuck, owns Southern Classic Foods.

“Chuck set an opening date for Collier’s on September 29, 2015,” Caraway said. “We were not ready to open but, because Chuck is a man of his word, we posted a small opening sign and expected a few friends to come.  We had 164 people and we ‘were not’ ready to open.”

Caraway said it took a while “to get ready to open.” Collier’s is open daily for lunch, except on Sundays, and Thursday, Friday and Saturday nights with music and a bar and an event center that seats up to 350.

Collier’s is located right across the street from the Brundidge Police Station.

A diner who did not know “Mo” asked her what idiot would open a bar across the street from the police station.

“I said, ‘that would be me,’” Caraway said laughing.

“Being in the restaurant business has not been easy. I’ve found my shoes in the refrigerator and the bread in the closet but we enjoy it and we enjoy being a part of the Brundidge business community and we love our customers.”