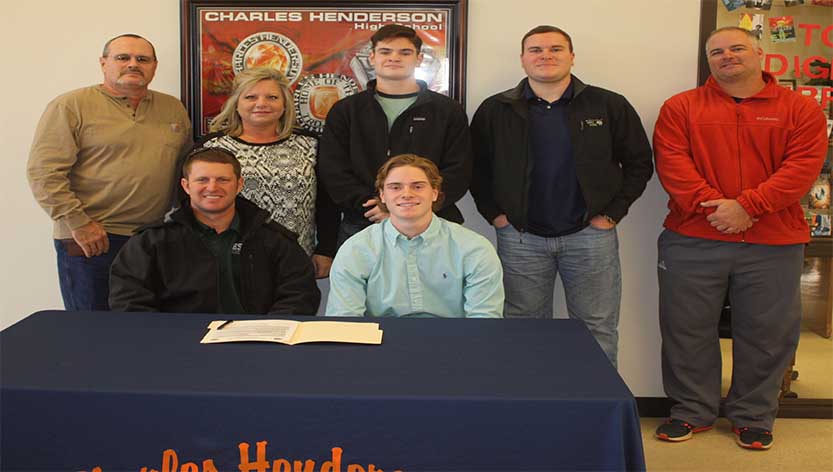 When the 2016 Charles Henderson High baseball season began, there were a number of holes to fill in the lineup from a heavy graduating class from the previous year, giving a number of young men an opportunity to prove themselves.

Carson Tucker was one of those Trojan baseball players that made the best of the opportunity, and as a result of his effort, the senior signed a scholarship Monday morning to play baseball at Enterprise State Junior College next season.

“He’s a very competitive kid that worked hard last season, and he put himself in a good position to achieve this,” said Enterprise State head coach Bubba Frichter. “He has good speed, and is really going to fit our needs. I became the head coach in August, so signing a quality kid like Carson is what I want to build our program off of.”

Tucker is the third CHHS Trojan baseball player to sign a baseball scholarship in recent weeks, following Jackson Murphy who signed with Wallace-Dothan and Hunter Reeves who signed with Jefferson Davis of Brewton.

CHHS head baseball coach Josey Shannon is proud of the signing of the three young players thus far, and the extra effort of Tucker, with a fourth player to sign soon.

“You can tell a lot about a young man through his work ethic,” said Shannon. “A lot of times if they have good work ethic they will be good individuals. Carson has worked very hard and continues to do so. We had a couple of other guys that have also signed, and Bryson Gandy is getting ready to sign with LBW (of Andalusia). The part of my job that I love the most is seeing the smile on their face when they accomplish something like this, and seeing the hunger in the other guys eyes to want to be sitting there. Carson just has an outstanding family and he is an outstanding kid. He’s very deserving of this opportunity.”

Tucker stepped us last season in his first year of varsity, batting .310 and posting a 4-2 record on the mound.

“I am just grateful for the opportunity,” said Tucker. “I worked hard and I’m excited about it. I was surprised at how well I did last season, and glad our team went as far as we did. I think we’re going to have a good team this year with 11 seniors, as we have a lot of experience.”

The Trojans began throwing on the field Monday, and can begin hitting on Jan. 26. The season opener is Feb. 23 in the annual Terry Sikes Tournament.