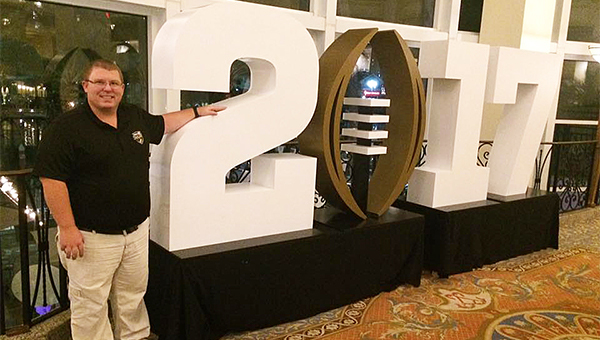 Doug Gooden’s work with a Montgomery television station took him to his first National Championship Game in 2010, an experience he thought would be a once-in-a-lifetime event. This year, he’s attending his eighth National Championship game in Tampa Bay, Florida and even he marvels at that opportunity.

The Alabama Crimson Tide is back in the National Championship for the fifth season under head coach Nick Saban, and fans from Pike County are headed down to Tampa to see the event.

Among them is WSFA cameraman Doug Gooden of Troy, who first got to cover the national championship game in 2010 between Alabama and Texas in Pasadena, California. At the time, Gooden described the opportunity to his wife as a “once in a lifetime” event.

Seven years later, Gooden has been to every national championship since then with the exception of 2015.

2015 was the only year since 2010 that neither Alabama nor Auburn played in the national championship game, and even then Gooden got to cover the first ever college football playoff game between Alabama and Ohio State.

Gooden is a Troy fan, but says that between Alabama and Auburn, he would lean towards the Tide since he has covered them since 2003. That’s lucky for him, as he’s gotten to see them win four titles now and could very well see his fifth on Monday night.

Gooden said that they have all been special, memorable moments.

“They are all special, memorable moments,” GOoden said. “I think the most meorable may be the first one because it was the beginning of arguably the best football dynasty ever.

The Auburn championship win the next yeart year was also specialto Gooden simply to see the two big rivals both win titles consecutively.

“What are the odds of theat happening?” Gooden said.

Even the losses, Aubun in the 2013 championship and Alabama in the 2015 playoff semifinal, were fun– although Gooden did say it was hard to ee a team he’d been covering all season lose in the final stretches.

Former Brundidge mayor Jimmy Ramage and his son John Ramage, president of First National Bank of Brundidge, are also headed to see the game, as they have done for every national championship for Alabama during the Saban era.

“Me, my dad and my brother, Jim, have done all four of them– five come Monday,” John said.

Instead of flying down and back like they had done in previous year, this year the Ramages decided to drive down to Tampa on Monday and drive back to Troy on Tuesday.

“We flew out to Pasadena back in ‘09 and watched that game and flew back in. For Baton Rouge and Miami we did same-day charters. This year we’re doing something a little different and driving down.”

All three of the men are Alabama alumni. Jimmy graduated from the college in 1969, while Jim and John both graduated in 1994.

As alumni, getting to go to so many national title victories has been truy special for the family.

“As an Alabama fan and Alabama alum, its been great to share that with my dad and my brother,” John said. “My father-in-law was still with us for the first championship, and he grew up in Pasadena, so that was pretty special. Dad worked for Coach Bryant while at Alabama in Bryant Hall and in his office, so we bleed Crimson and it’s been great.”

John said that he and his family are savoring this special run, as they remember the ‘”dark times” when Alabama was not even in contention for a national title. John is the only one in the family not to attend the college during a year the team won it all.

Still, the most special part about it for John is spending the moment with his family.

“At the end of the day, I’m just happy to be in the stands with my dad and brother,” John said.

The game will kickoff at 7 p.m. CST and will be televised on ESPN.