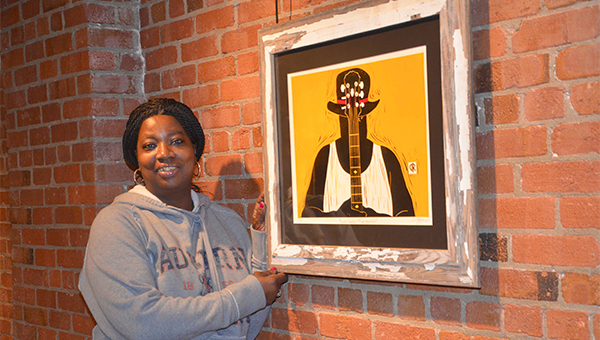 The Johnson Center for the Arts is featuring the artwork of two African American women, local artist Belinda Harrison and Birmingham artist Debra Riffe, in a duo show through February. Riffe is well known for her wood and linoleum block prints. Harrison is beginning a career as a painter. Mary Hobdy is pictured with Riffe’s “Behind the Music” block print.

The Johnson Center for the Arts in Troy is two honoring artists on opposite ends of the artistic spectrum with a duo-show now through the month of February.

“We are excited to bring two, female African American artists to the Johnson Center during the time of the year when we recognize the contributions of African Americans to American Culture,” said Vicki Pritchett, JCA director. “We are featuring the paintings of local artist, Belinda Harrison, who is beginning as a professional artist, and Debra Riffe, who for 30 years, has received acclaim as a linoleum- and wood-block artist.”

Pritchett said the duo show, Riffe’s “i learnt to sing a glad new song” and Harrison’s “Varieties,” epitomizes two strong African American women during Black History Month and at the time of the Leadership Conference at Troy University and the Spiritual Music concert at the Johnson Center.

“We are extremely pleased to celebrate the diversity of the arts in Pike County,” she said.

“I love the fact that these two women are showing together. Belinda is going to extremes to practice her art. She has three young children and her studio is a corner in her kitchen. Debra works fulltime for the City of Birmingham. She comes home to practice her art in the spare bedroom at her home. She is helping a son through graduate school.”

Despite the obstacles in their lives, Pritchett said these two women “must do their art.”

“When you see their work, you can see the emotion they feel,” she said. “Their passion for art is reflected in their work. Finding time to ‘be’ artists could not be easy for either of them but Debra and Belinda find time to do art and to be artists. We are proud to show their work.”

Debra Riffe, a native of Tupelo, Mississippi, is particularly known for her meticulous hand-pulled block prints.

“I enjoy the versatility and the immediacy of drawing with a pencil and the physicality of turning the wheel of a press. Through simplicity of form, I use basic art principles to convey shape, gesture, attitude, movement and emotion,” Riffe said.

“Food, race, religious traditions and music are topics that continually shape my visual narratives. My compositions are, exclusively, images of African Americans placed in rural southern surroundings performing routine tasks in timeless, solitary, reflective moments. Tasks that speak of social status and identity; intimacy and a sense of place.

Riffe said she appreciates the ordinary and tries to record details, within each print, that will stir an emotion the viewer might respond to.

“Each impression carries its own commentary, however, it is my hope that my images will take viewers to the center of a remembered world, most of it long gone; some of it changeless,” she said. “Mississippi, my home state, is a place that can not be confused with any other place in the universe and it forms the core of my being. I was too busy growing up in the 60s and 70s to identify the character molding influences of a time or place. Deep down, however, I understood family values and rituals, stillness, silence and the rhythms of life. All that I create grows out of an enduring Mississippi legacy — the smell of red clay, cicada night songs and indigo skies; my family, their lives and their stories.”

Harrison was born in Geneva and grew up in Mobile. She was moved from foster home to group home to foster home.

“Somewhere along the ride I found the most amazing world—the world of art, Harrison said. “I sketched here and there but I had no form, just tracing mostly.”

Even though her artwork was mainly tracing, Harrison art became the stabilizing element in her life. Even though she seemed to “always” be moving her passion for art was constant.

“When I moved again, the universe brought me to a person who would shape and mold me forever,” she said. “At Charles Henderson High School, I met Pam Smith, the art teacher. She quickly became the person I looked up to.”

Harrison joined the CHHS Art Guild, won numerous art awards committed to continue her artwork, if not as a career as a lifetime hobby.

Harrison was fortunate to visit the Metropolitan Museum of Art in New York City.

“The works of Picasso, Salvador Dali and Van Gogh, inspired me and drove my excitement to pursue art,” Harrison said.

After graduating high school in 2001, Harrison enrolled at Troy University and declared art as her major.

“Since then, I’ve continued to paint, not only for enjoyment but as a means to generate an income.”

“I appreciate the chance to show my art at the Johnson Center,” she said. “This opportunity has given me the inspiration to keep creating art.”

Christmas trees tell stories at Johnson Center for the Arts