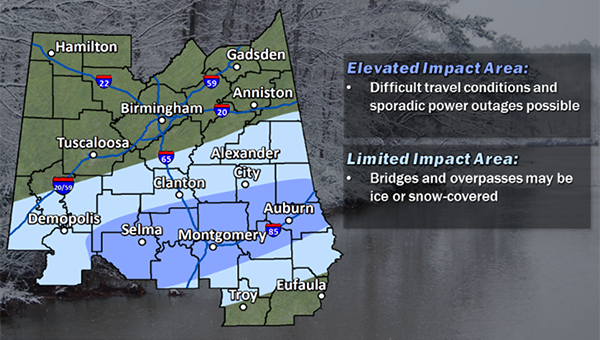 As Winter Storm Helena gets closer to arriving in the Southeast, Pike County gets more and more likely to see some rare snowfall.

Winter storm warnings are currently in effect for much of central Alabama and a precipitation map released Thursday morning by the National Weather Service shows snow or sleet could extend into the northern parts of Pike County.

Pike County is just barely on the outside looking in of a group of central Alabama counties under a winter weather advisory, with Northern neighbor Montgomery County officially included in the coverage.

Although some school systems north of here have decided to take a weather day or close their doors early, Pike County Schools and Troy City Schools had not been dismissed as of 4 p.m. on Thursday.

Sleet and freezing rain can cause dangerous road conditions as roads and bridges can suddenly and unexpectedly become icy, causing drivers to lose control of their vehicles.

Governor Robert Bentley declared a State of Emergency on Thursday that will take effect for all counties today at 7 a.m. Although Pike County is not likely as of this time to have severe weather, Bentley explained that he declared the state of emergency to make sure all agencies were prepared to go should something happen.

“I am encouraging all Alabama residents to be prepared for the potential of significant winter weather and I have directed my essential state agencies to do the same,” Governor Robert Bentley said. “With any severe weather event there is always a measure of uncertainty; however, it is important for everyone to take the necessary precautions and stay informed of the latest weather predictions in your area.

“I have issued a State of Emergency to ensure all available state resources are ready to be deployed if and when it is deemed necessary.”

Residents planning to travel north this weekend should take into account that heavier snow and ice conditions are expected to the north and east, which could cause more serious travel delays and risks. Airlines may also be delayed due to the inclement weather.

Residents should stay tuned to weather alerts, as forecasts can change quickly and unpredictably.