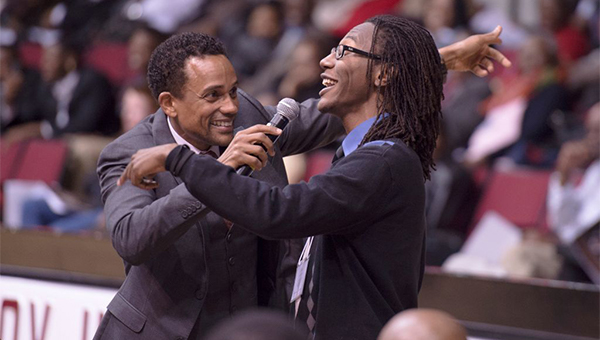 The Annual Leadership Conference at Troy University will mark its 16th years in 2017. The conference brings together nationally acclaimed speakers to help inspire and motivate community leaders. Registration for the Feb. 3-4 conference is open now.

Registration is now open for the 16th Annual Leadership Conference at Troy University on Friday and Saturday, February 3 and 4.

The Leadership Conference will open at 6:30 Friday night with Rickey Smiley at Sartain Hall and conclude with a luncheon at 11:30 Saturday at the Trojan Center Ballroom.

Davis will be the keynote speaker at the luncheon.

The Leadership Conference is sponsored annually by Troy University and the City of Troy.

Shelia Jackson, Troy tourism director, said the city is, once again, excited to be a part of Leadership Conference.

“The conference is an opportunity for community leaders to come together to learn to be more effective and productive leaders,” Jackson said. “Those who attend the Leadership Conference each year are inspired and motivated to do more and be more to make our communities even better places to live, work and play.”

The conference will get off to a fast start with Smiley who is widely known for his prank calls.

“Rickey Smiley is known for disguising his voice and carrying on prank conversations on the phone,” she said. “He will be entertaining so come ready to laugh.”

Jackson said the 16th Annual Leadership Conference committee is honored to have Davis as its keynote speaker for the Saturday luncheon.

Davis was elected bishop in the AME Church in 2004. In 2008, he was appointed the Presiding Prelate of the 9th Episcopal District, which comprises the State of Alabama.

“Bishop Davis has preached and taught for more than 45 years,” Jackson said. “He has been a faithful servant of the African Methodist church and community and has earned the respect and admiration of other ministers, church and community members and government leaders. By his example, those who attend the Leadership Conference will leave inspired to be better leaders and better people.”

The theme of the conference is “Overcoming the Crisis in Education: Reconnecting, Relevance and Results.”

Jackson said the conference is a great opportunity to learn more through the sharing of ideas and experiences.

“Community leaders and students leaders have opportunities to participate in break-out sessions as well as benefitting from the wisdom, knowledge and experiences of the conference speakers,” Jackson said. “All of those who want to be a positive influence in their community, in their state and in their world are invited.

Register for the 2017 Leadership Conference online at troy.edu/leadershipconference. Registration is $30 and $15 for students. The registration fee includes the luncheon on Saturday.

LAST CUT: Adams graces the chair at Stinson’s for…