LAST CUT: Adams graces the chair at Stinson’s for one final cut 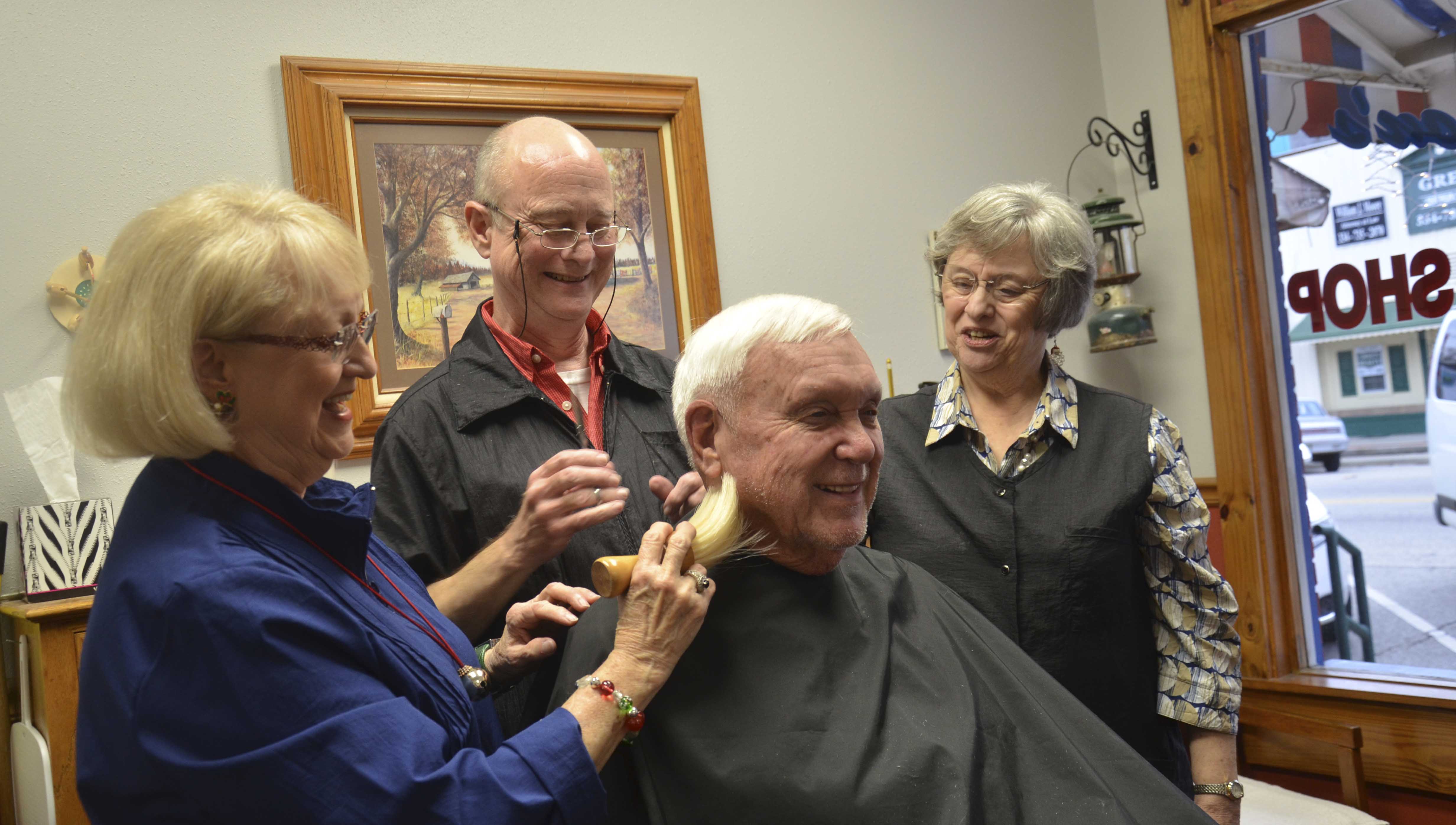 Charles Adams was the last man out of the chair the day Stinson’s Barbershop close. He and Lamar Steed had the honor of getting the last
haircuts at the historic barbershop. The children of Earl Stinson who barbered in Brundidge for 64 years, gave Adams the “brush off’ and
closed the doors on one of the longest running family businesses in Brundidge. Pictured with Adams, are Jimmie Stinson Jackson, Joe
Stinson and Ann Stinson Webb.

On December 23, 2016, the door to Stinson’s Barbershop in Brundidge almost never closed. The sign on the door was the reason.

At exactly 4 p.m. on that day, the barbershop that had been in operation on Main Street for 70 years would close its door, permanently, the sign read.

Jimmie Stinson Jackson, Ann Stinson Webb and Joe Stinson, had kept the barbershop open that their dad, Earl Stinson, owned and operated for 64 years. For several years, they kept it open in his memory and in support of the Brundidge community.

Stinson opened the barbershop around 1945 and barbered in Brundidge until his death in 2009.

Most any man or boy who lived or even visited in Brundidge during those years got his hair cut at Stinson’s Barbershop. The shop was an institution and the male population of Brundidge was “institutionalized.”

Those who stopped in on closing day shared their memories of Stinson and his right- hand man, Robert Garrett, and of the days gone by.

But two customers just kept hanging around that afternoon. Although neither Lamar Steed nor Charles Adams made it known, both were determined to get the last hair cut in the storied barbershop.

The barbers lingered and so did Steed and Adams. Neither made a move to the open barber’s chairs. Then, Ann and Joe snapped the barber’s drapes and that signaled the customers to the chairs.

“Ann had my head and Joe had Charles’ head,” Steed said laughing. “We both wanted to get the last hair cut at Stinson’s Barbershop. That would be a real honor for me .. for both of us.”

Steed got his first haircut at Stinson’s around 1972. He got “toniced up.”

“If you a good bit of hair you’d get it slicked back with tonic so it would stay in place,” he said. “Sometimes I’d get my shoes shined. I looked forward to going to the barbershop. There won’t many places like that anymore. I was sad to see it go. I’m just glad that I got to be one of the last customers.”

“I don’t know how long I’d been going to Stinson’s Barbershop, probably around 1961 or so,” he said. “We lived in Clio and I’d come to Brundidge to the barbershop and Mr. Stinson would give me flat top and sell me stick of wax to go with it. I’d go back to Clio and all= the boys would want a flat top just like mine. Nobody could do a flattop like Earl Stinson.”

Adams said Stinson taught him and lot of other young boys how to shave. “He showed me which way to run the razor, up and down,” Adams said. “He was a mentor to a lot of us boys that didn’t know anything.”

Adams said he, like Steed, found the barbershop a good place to go. “All boys learned a lot from Earl Stinson,” he said. “He was a good man and good role model. And, I wanted to be the last man out of the chair. That meant a lot to me. That barbershop meant a lot to Brundidge for a mighty long time.”