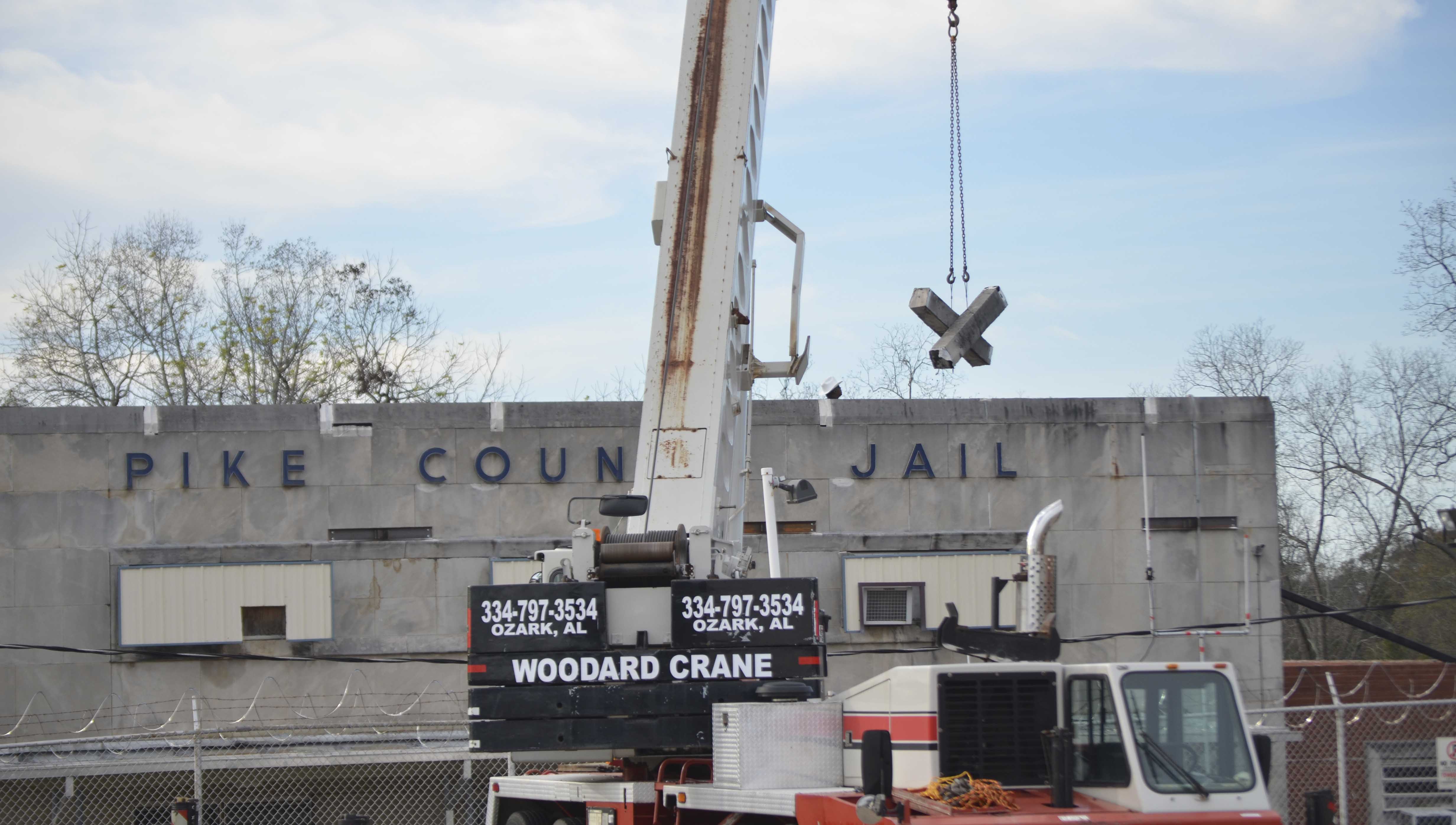 Work is underway at the Pike County Jail, where construction crews are working to shore up the building. County officials say the jail, which was built in 1957, needs to be stablized and made safe while commissioners explore options for constructing a new, modern correctional facility.

Repairs are underway at the Pike County Jail and could finish at any time now, with much of the parapet removed and the walls braced.

The Pike County Commission voted unanimously to go ahead with the emergency repairs at a meeting in September, hiring PH&J architectural firm to handle the project. Whaley Construction was given the job of going in and doing the work.

The work got started on Thursday and Pike County administrator Harry Sander says he expects the work to be done soon. Sanders explained the commission’s decision to go ahead with the project.

“The architect engaged a structural engineer to review the jail and suggested we take the measures we’re taking now and give us time to make plans to look toward building a new jail,” Sanders said. “We’re working to stabilize and make safe the existing structure for a period of time that will give us an opportunity to decide what to do moving forward, because it will take quite a bit of time to determine where the jail will be and what size it will be.”

The commission took its first step in the process of determining how to handle the new jail by sending invitations to do a feasibility study, a requirement before the USDA will finance the project.

“We hope to be doing that as soon as possible,” Sanders said. “We’ll have a report on that at our next meeting.”

Sanders explained that reports from the structural engineer left the commission without much option for the jail.

“Because it was built in 1957, it’s antiquated for its current use as a correctional facility,” Sanders said. “Certainly the commission is always interested in our history, but what’s more important at this point is the functionality. Not only do we have to be concerned about the inmates placed in that facility, but also the workers. Keeping people safe is certainly our foremost concern, and then moving forward toward the future to have a proper facility for not just today and tomorrow, but for years to come.”

“If you could come inside and see what it’s like and see the cells, everything is deteriorating,” Barron said. “It’s not safe.”

Barron explained that the jail had roofing contractors refuse to work on it when they tried to get leaks fixed earlier this year.

“No roofing contractors will touch it because of that wall,” Barron said.

In addition to the bad condition that the jail is now in, it also wasn’t built to hold as many people as it currently holds.

“We book a lot more people now than back when this was built,” Barron said. “Our options are very limited for where we can put inmates. We need an up-to-date facility. It would make it better for our inmates and our workers.”