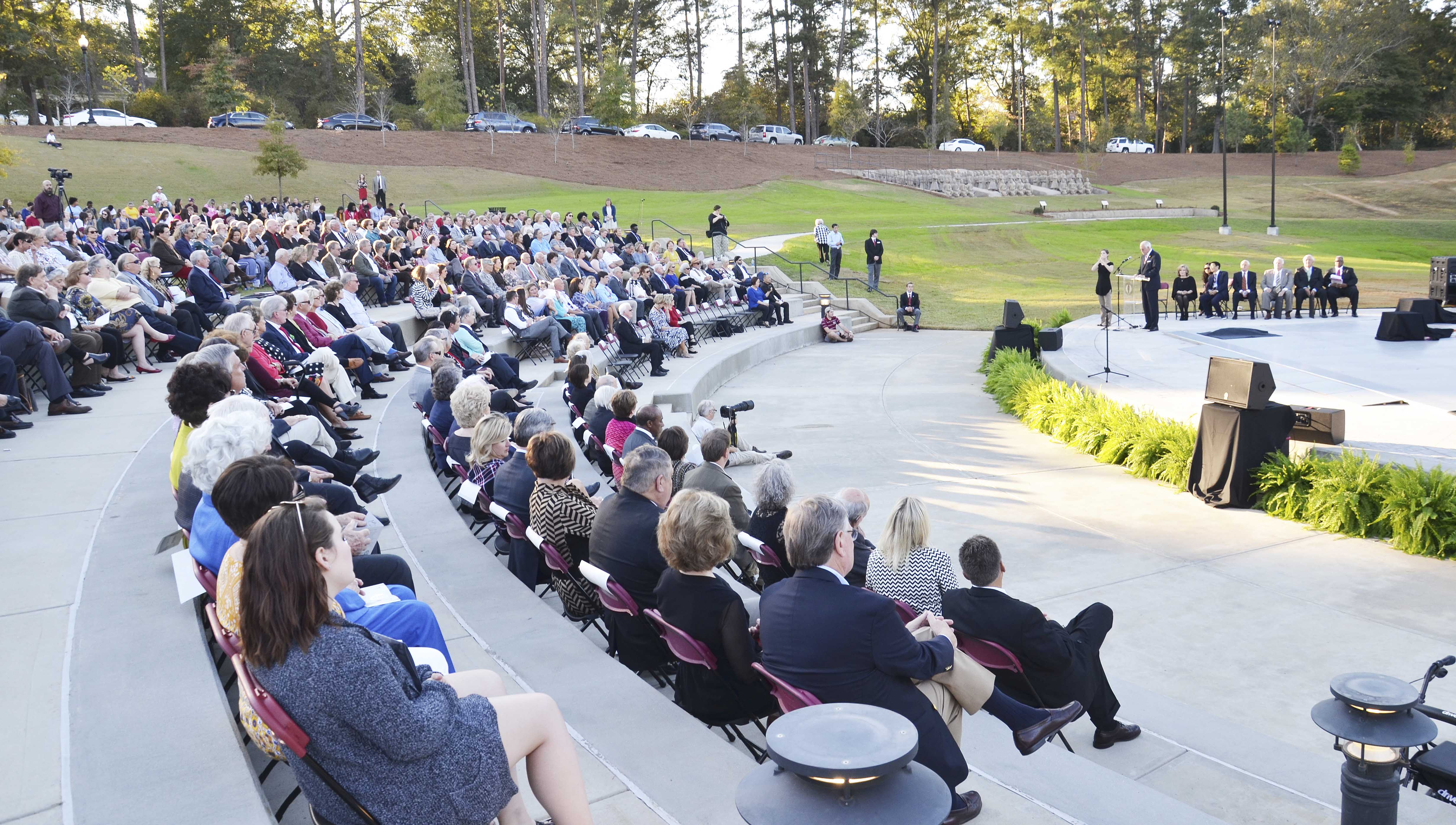 The opening of the new Janice Hawkins Cultural Arts Park on November 4 was the highlight of the year in PIke County (at top). Internationally acclaimed artist Nall Hollis provided a pernament exhibit at the gallery at the International Arts Center (bottom right). Throughout the year, the Troy Arts Council and the Johnson Center brought performing arts and visual arts, like Chris Beck (bottom left) to PIke County.

If grades were given for the cultural arts, Pike County would receive an A+ on its 2016 report card.

The arts have been front and center in the county from January through December. Each month featured arts opportunities that would be expected only in the country’s most cultured cities.

Leading the way are Troy University, the Troy Arts Council, the Johnson Center for the Arts and the Brundidge Historical Society.

Each contributes to the arts throughout the year with unique programming including the visual arts, music, dance and theater.

The year 2016 was a banner year for Troy University with the opening of the Janice Hawkins Cultural Arts Park on November 4 that featured the dedication and concert inside the park amphitheater.

The park includes several prominent art installations. “Violata Pax Dove” by internationally acclaimed artist and Troy native Nall Hollis is located in the Daniel Foundation of Alabama Plaza and is a symbol of both beauty and sorrow. Throughout the park, 200 replica terracotta warriors, by internationally acclaimed artist Huo Bao Zhu, are displayed in exhibits that represent the famous excavations in China.

The 200 replica terracotta warriors’ exhibit is the largest such exhibit in the country and is expected to bring large numbers of visitors to the campus.

The Warriors Unearthed exhibit by artist Frank Marquette interprets the history behind the famous terracotta warriors.

The International Arts Center houses a permanent gallery featuring the works of Nall and the Huo Bao Zhu Gallery, which will house a revolving gallery of art and host exhibits. The arts center also has a student educational space.

Pam Allen, chair of the university’s art department, said when she first walked into the International Arts Center, it was like walking into the world of Thomas Kinkade, the “Painter of Light.

“Everything was filled with light. It was pulsating,” Allen said. “This is a wonderful place to create and to exhibit.”

The park is poised to become one of the region’s most important centers for the study and appreciation of global art.

“As Alabama’s International University, it is only appropriate that students and visitors can come here to dance, to sing, to learn, to find inspiration and to experience the world,” Hawkins said.

The Johnson Center for the Arts had an exceptional year that featured the artwork of local and national artists as well as that of students from the local schools.

“We were excited to bring such an outstanding and varied lineup of artists to the Johnson Center,” said Vicki Pritchett, JCA executive director. “It was a fun year and every exhibit was well received.”

Pritchett said the year got off to a fast start with Birmingham artist Darius Hill’s massive installations.

“For his exhibit, Darius looked back at his childhood and how his art was affected by the Civil Rights movement,” Pritchett said. “We also were honored to have New York artist Mike Howard exhibit at the Johnson Center. His huge canvases that depicted rural scenes were extremely popular. We were also honored to have us wife, Mary, who designs sets for world renowned photographer Annie Leibovitz and others share her experiences at ArtTalk.”

The exhibit by Lindy Bruggink, an award-wining portrait artist from Ozark, featured portraits of notable judges and was extremely popular as was Scott Myer’s “The Alchemy and Crucible,” which had a religious theme, along with Bruce Phillips, whose work is influenced by his interest in architecture, Pritchett said.

“We were thrilled to bring local artists, Chris Beck, Nancy Murphree Davis and Mary Ann Casey to the Johnson Center,” Pritchett said. “All of those exhibits were extremely popular and the community really turned out in support of the artists and in appreciation for their incredible talents. We also exhibited the folk art of the late Dr. Doug Hawkins as well as works from his art collection.”

The exhibit of artwork on loan from the Booth Museum of Western Art in Cartersville, Georgia brought many new visitors to the JCA as did the “Wild West” student art show.

In closing out the year 2016, the JCA featured the ever popular Christmas Tree Extravaganza. Eleven trees, including one that measures 20 feet, were decorated with ornaments made by students in the city and county school systems.

The Troy Arts Council, which was founded in 1972, was once again successful in its mission to enrich the lives of people in Troy and Pike County by facilitating events of the visual arts, theater and music.

“This year, 2016, was one of the best years ever,” said Joel Williams, council president. “Community support was broadened. We enlisted corporate sponsors. Attendance improved and we had a full working board of directors and that’s a big deal with you get down to business.”

The business of the board includes scheduling the council’s entertainment calendar for the year.

“We have two anchor events, Shelia Jackson’s Christmas concert and the Southeast Alabama Community Band concert in the spring,” Williams said. “We plan around those two events.”

The TAC’s membership kick-off drive was held on the square in downtown Troy and featured a free concert by the Hot Club of Auburn and was highly successful.

The TAC opened its 2016 calendar season with the Annie Moses Band is a nationally known band with a huge following.

“We had good local response and people come from all across the area for that event. It was big. The band was outstanding and everyone was well entertained.”

Ventriloquist Lynn Trefzger’s performance was tailored for family audiences and she delighted the audience with her zany characters and audience interplay.

“The Malpass Brother, a bluegrass group with incredible musicians was popular with our audience as were the Broadway Boys, who brought a different kind of performance to the stage,” Williams said.  In February, the TAC presented the Pike County Men’s Chorus in concert at First United Methodist Church of Troy.

“The TAC is active in the community,” Williams said. “We provide grant awards to art and music teachers in the city and county schools. The funds are used to purchase supplies for their programs. We also award the annual Jean Lake Scholarship each year to a graduating senior who plans to continue his or her interest in the arts.”

“This year was our 15th year of ‘Come Home,’” said Lawrence Bowden, BHS president. “We welcome new members to our cast of veterans. This year, we had the largest number of new members we’ve ever had. Everyone did a great job and we had a successful season.

“At the We Piddle Around Theater, we’re family and the atmosphere of the play is like being home at suppertime. And, there’s no better place to be.”

The BHS also sponsors the annual Pike Piddlers Storytelling Festival at the We Piddle Around Theater in Brundidge and the Trojan Center Theater in Troy.

“Every year, we just don’t think we can have a better storytelling festival than the last year,” Bowden said. “And, every year, the storytellers prove us wrong. This year, Donald Davis, the Dean of Storytelling, was back for the 10th year. He was joined by nationally acclaimed storytellers Kevin Kling, Josh Goforth and Kim Weitkamp. Charlie Lucas, a friend of the late Kathryn Tucker Windham, Alabama’s legendary storyteller, was a guest teller.”

Bowden said the BHS varied somewhat from its usual Chili Country Christmas event with Birmingham’s Three on a String, which is a comedy/musical trio,” he said. “It was a variety type show and everyone left having been well entertained.”

Bowden said the BHS also offered a theater workshop for young people that was very successful and is planned again for next year.

“Our 25th Peanut Butter Festival, harvest and heritage continues to promote our heritage as a farming community,” he said.