HOME FOR THE HOLIDAYS: Williams family finds home, deeper faith thanks to Habitat for Humanity’s program 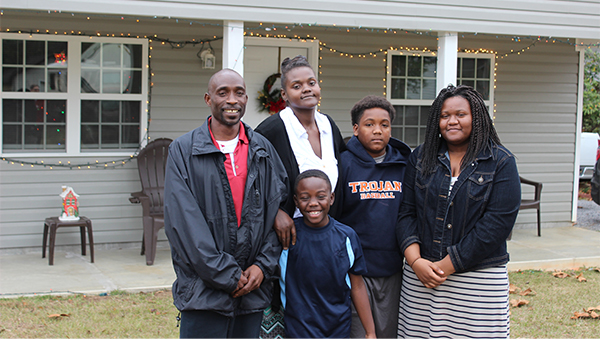 Like many front porches in Troy in December, there are holiday lights brightening the season at the Williams home. But the blinking red, green, and gold lights seem a little brighter to Sherman Williams and his family.  The lights spiral up the front porch columns and frame the front door. Inside, a Christmas tree, ornaments, and presents take pride of place in front of the picture window. Miniature sleighs and Santa’s decorate the living room.

This 2016 holiday season is special for the Williams family because it marks the first Christmas they will celebrate in their new home on Fairview Avenue. The house is the culmination of a long-hoped-for dream by Sherman for his family. The dream became a reality through the efforts of the Troy-Pike Habitat for Humanity.

Volunteers from the local chapter of Habitat spearheaded the drive to raise funds, plan, and build the Williams house. Together with community volunteers, local businesses and churches, and Troy University students, Sherman personally contributed many hours in “sweat equity” to the construction of the house. Sherman also donated his labor in the construction of two earlier Habitat builds for other families.

According to Melissa Mikul, president of the Troy-Pike Habitat for Humanity, Sherman’s family was selected on the same criteria as all Habitat families: need, income, credit rating, employment history, willingness to partner with Habitat, and ability to pay the zero-interest mortgage payments.

“However, in interviewing this family,” Mikul said, “there was something in their character, a positivity that drew the board to them. As we began working with Sherman and his family, we realized what a treasure we had found. Their work ethic and deep faith has proven to be an example for all of us.”

Habitat’s purpose is to provide “decent, affordable housing,” but does not give away “free houses.” Habitat coordinates the purchase or collection of construction materials, organizes building teams, supervises the actual construction, and provides hands-on labor. The family still is responsible for the mortgage.

Sherman’s dream of owning his own home started at a youth baseball game in 2012 in Troy. Sherman was good enough in baseball to have been recruited to play at UAB, and years later he found himself helping to coach his son’s baseball team. “When you’re an athlete you just can’t sit on the sidelines,” he said. At those practices he got to know Amy Drinkard, who was watching her nephew play baseball. Sherman and his family were living in public housing at the time, and it was Drinkard who bought up the idea of a Habitat house to Sherman.

Sherman thought that his chances of selection were a long shot. But according to Sherman, Drinkard kept encouraging him, “‘Pray about it and turn in the Habitat application. Put it in God’s hands and let’s see what happens.’”

Sherman filled out the Habitat paperwork and began volunteering time and labor at Habitat projects in Brundidge and Troy. “I still didn’t think I was going to get a house,” Sherman said. “My intention was to learn about how to build a house. I never had a chance to learn about anything like that. For me it was always about baseball.”

On weekends for the next two or three years, Sherman learned how to frame two-by-fours into stud walls, shingle roofs, install vinyl siding, and hammer a lot of nails. He persevered and hoped. In summer 2015, Sherman and his family were selected for the next Habitat house.

“Amy called me and said ‘Your prayers have been answered,’” Sherman said.

At first, the news was unbelievable, and he was in a little bit of a shock. “There is power in prayer,” he said. “I just didn’t think it was going to happen.”

While Sherman was helping coach the youth baseball team, several members of Troy’s church community invited him and his family to attend services. At first, he would accompany his oldest son, Quay, to church as a sign of support. Sherman admitted that he had never been very religious.

“I never was looking for anything,” he said. “All I just wanted was for my children’s lives to be different from what mine was. I didn’t want them to be around no foolishness.” It was concern for his children that refocused Sherman’s priorities.

The Rev. Luke Lane, pastor of Troy’s First Baptist Church, recalled Sherman’s journey. “It transpired that two or three men, such as Keith Sessions, David Nelson, and Al Renfroe befriended him on the baseball field with their kids playing baseball, and invited him to come to church, and he came, and the people in the congregation befriended him.” In time, Sherman asked to become a member of FBC and was baptized. “They’re a great family,” Lane said. “He is a hard-working man. He’s a man who loves life, loves his wife, loves his kids. Since I’ve known him, his love for Christ is so evident and it shows through his family. Through everything he does. He really is a great example.”

For years, Sherman’s family had been living in public housing. Owning his home has been an adjustment.

“I learned,” he said, “that there is a little bit more responsibility — the other place wasn’t mine. But here, yeah. You want to take care of what you got. I’m having to budget my money better. But I’m smiling because it’s OK — the house is ours.”

Sherman and his wife, Marquetta, have three children: Laquisha, 15, Quay, 13, and Damien, 8. In the 1,300-square-foot house, there are four bedrooms and two full baths, enabling each of the children to have a bedroom.

“I have more privacy here,” Laquisha said. “And a lot more room.”

Laquisha enjoys the house as much as anyone. She organized the Christmas decorations. They went up the day after Thanksgiving, the first in the neighborhood.

In addition to learning the basics of house construction, Sherman admitted that he learned other things as well working with Habitat volunteers. The most important?

“Fellowship,” he said. “I see that they work together . . . we’re community. They work with what they have with a lot of volunteers, and that’s showing me that it’s from the heart. You can do something, but it’s got to be from the heart.”

In the beginning, Sherman may have simply wanted gain experience building things, but there came a tipping point when he understood that it was not just about sawing lumber anymore.

“That came from being around others,” he said.

“You see the things that they’re doing. It inspires you. Wow. It’s more than just me — it’s a lot of other people that are willing to help. That’s what I’ve seen — literally seen. We have fun.

“But the fellowship . . . what I’ve seen and heard, I’m willing to tell other people about.”