GIVING BACK: Dozens of volunteers feed the hungry with ‘Turkeys from Heaven’ 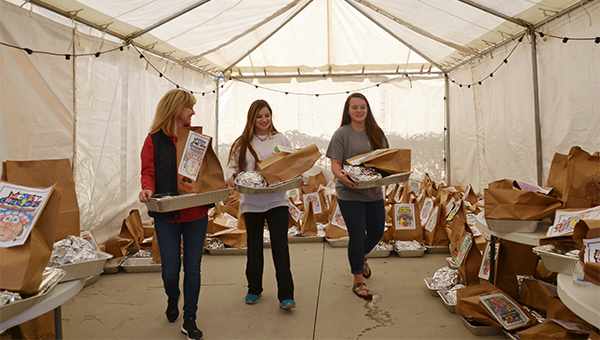 Kelly Sanders, above left, worked with volunteers to help prepared and deliver more than 400 turkey meals to hungry families throughout Pike County on Thursday. Sanders spearheads the annual Turkeys from Heaven program, which took place on Thursday.

“God has been good to me and I want to be good back to someone else.”

Carla Rice put into words what, in all probability, the scores of volunteers were thinking Thursday, as Turkeys from Heaven meals were being prepared, loaded and delivered to 400 people in need.

Rice was a first-time Turkeys from Heaven volunteer and, she like so many volunteers, had a misty-eyed story to tell.

She joined the long line of women and young girls who packed the trimmings for the Christmas meals that included exactly four hundred of everything, from the green bean casseroles to the cans of cranberry sauce. But the desserts were all donated and delivered at different times on two days so it was anybody’s guess as to how many desserts there were.

As the packed meals came down the line, Rice heard someone say, “This is the last one.”

“There was one dessert left,” Rice said. “Four hundred desserts had been donated. Not one short or one left over. Everything was perfect as if it had been planned that way. It made me tingle all over.”

Kelly Sanders gets that same tingling feeling every time she hears a story of how Turkeys from Heaven touches the lives of, not only those who receive the meals, but the volunteers as well.

Sanders organized Turkeys from Heaven in the Troy area three years ago after learning about the program from a friend who organized the program in Dothan. This year, the Troy program was extended to Crenshaw County and included 80 residents in that area who are in need of a helping hand.

“It excites me to see so many people involved in making Christmas brighter for those who are less fortunate,” Sanders said. “Oh, yes! It is so great, to experience the joy of giving and to know that people accept with open hearts.”

Volunteers of all ages came from all walks of life. Some came for the first time; some for the second and third times. Some came with friends or family members. Some came alone. But they all came because they wanted to be a part of a Christmas that, as the Old Grinch said, doesn’t come from a store. “Something that means, perhaps, a little bit more.”

“Turkeys from Heaven” does mean a little bit more said Daphne Coppage who is a “seasoned” volunteer with the program.

And for some, it is an opportunity to give back.

Amanda Smothers and her daughters, Abby and Lily Kate and her mom, Kitty Benton, were volunteering as a way of expressing gratitude for kindnesses shown to them and to pay it forward.

“When my parents’ house burned a few weeks ago, people came and showed so much love and support to our family and lifted us up,” Smothers said. “We were blessed by the kindness of others. We wanted to take this opportunity to do something in return.”

Smothers said there is no way to adequately pay others back for their love and kindness but you can always pay it forward by showing the same love and kindness to others through volunteer programs like Turkeys from Heaven.

Until this year, Bob Mills has not had time for “volunteer stuff.” He decided to test the waters at Turkeys from Heaven. He wanted to know more about the program that Sanders found so worthwhile. It didn’t take him long to know.

“Kelly and all the volunteers are making a real contribution to those in our area who are less fortunate,” Mill said. “You can’t get much better than that.”

Paul Watkins has been smoking turkeys for the program since it began and, quickly and boldly, admitted that his turkeys are “always the prettiest.”

And, even though that might seen a bit boastful, he speaks with a humbled heart.

Jimmy Barron said it is rewarding to do for others, always.

“Sometimes there are those who take advantage of the generosity of others but who’s to judge?” he said. “If your heart is in the right place, you don’t have to worry about individuals. If a program like Turkeys from Heaven changes just one life for the better, then it has been worth it for all of those who participate.”

A man approached Sanders as the Turkeys from Heaven meals were being prepared Thursday for a meal.  His appearance suggested that he could be genuine in expressing his need. He was not on the list of 400 but because there was a duplicate referral, he was fed.