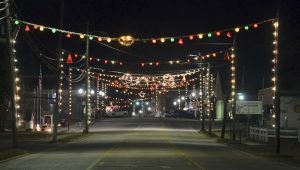 Messenger photo/Jaine Treadwell
The streets of Brundidge are lit up for the Christmas season. Usually the street lights come on for the annual Christmas parade and stay on through Christmas. This year the light display was turned on when the calender flipped to December.

The Christmas lights in Brundidge are traditionally turned on the night of the annual Christmas Parade. However, this year the town was all aglow on December 1 for the Chili County Christmas event at the We Piddle Around Theater.

“We had people from Montgomery to Dothan in town for our annual Christmas show and they all commented on our town’s Christmas lights,” said Cathie Steed, a member of the sponsoring Brundidge Historical Society. “Many of them said they make special trips to Brundidge each year just so see our Christmas lights. They were thrilled that the lights welcomed them to a Chili Country Christmas.”

Many of those who attended Chili County Christmas said the old fashioned lights that are strung across the street in the downtown area remind them of how towns were decorated when they were children, Steed said.

The string lights have been a part of the Christmas tradition in Brundidge for generations. And, when generations of Brundidge residents think Christmas, they most surly have memories of the simple strings of colored lights,” said Jimmy Ramage.

“Our Christmas lights go back to the early 1950s,” said Ramage, who remembers the lights from his childhood. His sons and his granddaughters have the same Christmas memories.

“It’s unusual for three generations, four for some families, to have the same childhood Christmas memories,” Ramage said. “But for us here in Brundidge, we have those generational memories. That’s special for my family as it must be for hundreds of other families.”

“Joe and James had just come home from the Korean War and were back work at the electric company,” Ramage said. “The three of them got together and decided to upgrade the string Christmas lights. They drew up the designs for the stars and the bursts. They bought a plastic Santa Claus for each of the corner poles. We’ve been fortunate that we still are able to use the strings lights almost just as they were more than 60 years ago.”

Ramage, who served the city as mayor for 40 years, said there was never a time when “new” Christmas decorations were a consideration. “We always knew that people, and not just Brundidge residents, would be disappointed if we did away with the Christmas lights. They were a Brundidge tradition.”

Delatha Mobley, a longtime downtown business owner, agreed that local folks would have been more than disappointed at the loss of tradition. “We are proud of our Christmas lights,” Mobley said. “I can remember when our lights were nothing more than colored bulbs on strings. We were proud of them even then. We didn’t know any better. Now we know better and we’re just as proud.”

Mobley said she is also proud of the later additions to the town’s downtown Christmas decorations. “I don’t like gaudy things but I do like that we have added decorations,” she said. “Santa’s Workshop with the working elves and Santa Claus and his reindeer are great additions. Both of them have been around a good while and the children really enjoy them.”

The Nativity scenes are also a part of Brundidge Christmas traditions and are the cornerstones of the downtown Christmas decorations. The Nativity scene that is placed at Brundidge United Methodist Church each year features lighted plastic figures that were donated to the city by the late Mattie Lee Godwin. Brundidge artist Larry Godwin designed and painted the Nativity figures that are displayed on the grounds of Salem Baptist Church. The set was purchased by the Ramage family and donated to the city.

Mobley said Brundidge is beautifully, but simply, decorated at Christmastime.  “These decorations are vital to our community,” she said. “And, oh, my goodness, we are proud to honor our traditions.”