THE NATIVITY: Couple’s displays focus on ‘meaning of season’ 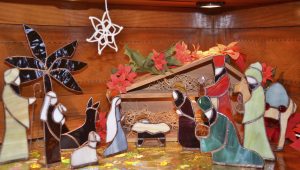 For Jimmie and Les Jackson, the Nativity collection they display each Christmas pays tribute to the ‘meaning of the season.’ The couple’s first Nativity set is one he hand-crafted in the 1970s. Since then their collection has grown to include stained glass figurines and more artistic interpretations of the manger scene depiciting the birth of Jesus Christ.

Along with Christmas trees, holly wreaths and Santa Claus, many American homes also display a Nativity scene during the Christmas season.

The tradition of the Nativity scene originated with St. Francis of Assisi who created the first-ever Nativity scene recorded in history in 1223 at Greccio, in central Italy. His Nativity was created in a cave with real people and live animals.

Tradition says St. Francis was concerned that more people were focused on gift giving than on the true message of Christmas and the meaning of Christmas was becoming lost.

Perhaps few homes in Pike County say “Merry Christmas” in a bigger and brighter way than the home of Les and Jimmie Jackson. Christmas trees and lighted villages, Santas and sleighs, poinsettias and Christmas cactuses are all a part of making the holiday season merry and bright. But central to it all are the dozens of Nativity sets that are reminders of the real reason for the season.

Jimmie Jackson created the first Nativity set for the couple’s home in the 1970s. At first glace, it appears to be carved of wood but it’s actually made of clay and glazed so as to give it the appearance of having Mother Nature’s touch. “That Nativity set is special because Jimmie made it,” Les Jackson said. “But, then, each one is special because each is a reminder of the real reason we celebrate Christmas. We don’t want that to get lost in all the trimmings of Christmas.”

The Jacksons’ Nativity sets are placed throughout their home. When entering through the front door, visitors are greeted warmly by an elegant Nativity that is among the couple’s most recent additions to the collection of sets.

“When Jimmie unboxed this one, we were surprised to find animals that are not usually included in a Nativity – a goat and dogs – but it was a stable so they could have been there,” Jackson said.

Most Nativities include Mary, Joseph and the Baby Jesus, the Three Wise Men, shepherds and angels, but some are unique in their portrayal such as the stained glass Nativity made by local artist Charles Adams.

In a grouping of Nativities, in the dining area of the Jacksons’ home, are Jimmie Jackson’s ceramic set, Adams’ stained glass set and one that was purchased for the Jacksons by missionary friends in South America.

“Jimmie gave them some money and said, ‘bring us something’ and we could not have been more pleased,” Jackson said.

The Jacksons’ collection of Nativity sets includes music boxes and Christmas tree ornaments. It includes scenes that are elaborate and those that are homespun. But from among them all, there is one set, rather simple in set on the Jacksons’ collection that, perhaps, best tells the story of Christmas. Glass-like figures of Mary, Joseph and the Baby Jesus are encased above the fireplace. A light has been placed so that it illuminates the Holy Child from within. The Baby Jesus was the light that was born into a world of darkness.

Even without the angels, the animals, the Three Kings and the shepherds in a Nativity scene, the real story is there. The birth of the Christ Child is the real reason for Christmas.