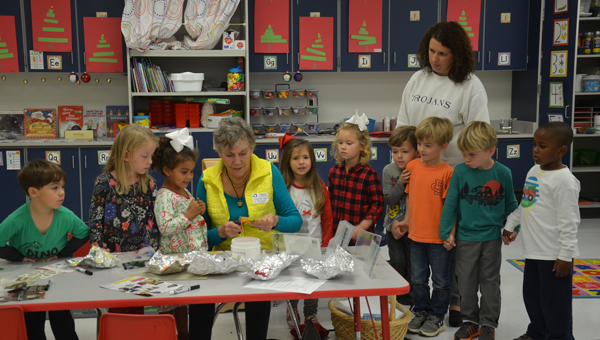 According to a Portuguese proverb, what is bought is cheaper than a gift.

If that is true, then the four-year-old students in Kelly Moore’s class at the Hank Jones Early Childhood Center in Troy are no Scrooges.

Under the direction of “Mama Pat,” the children made gifts for their parents that are and will remain priceless.

The nine students probably didn’t realize the value of their gifts. Kids don’t think about things like that but they do know that learning is fun, especially when it’s hands on and when they are getting their hands “on” an object that is usually off limits.

Pat Duke, an accomplished artist and the great-grandmother of class member, Tyler Johnson, is a familiar face in Mrs. Moore’s class. So familiar, in fact, that the children call her “Mama Pat,” just like Tyler, or Pat Pat, for some other reason.

“Mama Pat” came to class to teach the children an art lesson that would be a gift for their parents or some other special person in their lives.

“The objective of the lesson was for the students to make a simulated stained glass window,” Duke said. “And, as we worked through the art lesson, the children were learning.”

The motivation for the lesson was different examples of leaded windows from the Gothic Period.

Gothic is a kind of architecture.

In architecture, tracery is the stonework elements that support the glass in a Gothic window.

“I got off and colored on the table,” Bryant Hagans said as he colored the tracery.

“Make sure you don’t leave any white,” Duke reminded the young artists as the blackened the traceries with markers.

In Gothic architecture, a rose window is decorated with stained glass.

For the children in Mrs. Moore’s 4-K class, a rose window simply “has different colors.”

Stained glass is colored glass or, as the children said, “ironed crayons.”

The process of creating a simulated stained glass window included having the children color the tracery with black markers and then making the colored sheet with wax paper and shaved wax crayons.

A hot iron is not something that children should handle but, with Mama Pat showing the way, the children carefully ironed the wax paper creation, causing the wax crayons to melt and blend the colors into a random and unique design.

There were “oohs” and “ahhs” all around and smiles from ear to ear as the children admired their artwork.

They applied glue to the tracers and the tracers to the waxed rose windows. The wax paper was trimmed and the artwork was ready to be framed and signed.

“This was fun. I want to do it again,” said Bailey Jones. Her classmates agreed and so did Mama Pat.

And the art project allowed children who are in the “naming of the scribbling stage” to be creative by giving meaning to their marks or their scribbles.

“Children of this age are in the danger zone of creativity,” Duke said. “Too often parents try to ‘show’ children how to draw and that stifles their creativity. We don’t want to ‘show’ them how to draw or paint. We want to ‘let’ them be creative. This lesson was a good way for children to be creative.”

The selection of the colors for the simulated glass window, the way the shaved crayons were arranged and how they melted together was a creative adventure for the children that culminated in a treasured gift – a gift that cannot be bought.

Christmas trees tell stories at Johnson Center for the Arts