Next chapter:Reeves signs with Jefferson Davis 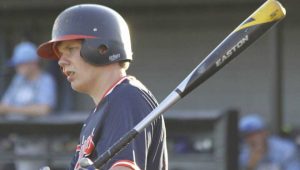 In August, while school was out, the last place you would expect to find a senior would be voluntarily running wind sprints during the heat of the day and wearing a weighted vest on the baseball outfield grass.

That’s about the first time new Charles Henderson High Head Coach Josey Shannon was introduced to Hunter Reeves, and that is when Coach Shannon knew Reeves was not your typical senior.

It was also that work ethic that encouraged the coaching staff of Jefferson Davis Community College in Brewton to offer a scholarship to Reeves, a CHHS pitcher and first baseman.

“I was working on the baseball field and he and his dad came down,” Coach Shannon said. “They stretched and he put on a 10-pound vest and ankle weights and started running 80 and 90 yard wind sprints, back and forth. I was just sitting there watching him run as I talked to his dad. I had never seen him throw, never seen him hit, and I said to myself, this kid is going to be alright.”

Reeves has always been motivated to be the best baseball player he could be, but an injury last season gave him extra incentive.

The right-hander has a career pitching record of 10-0, posting an 8-0 mark as a sophomore and was off to a 2-0 start last year when he injured his throwing elbow very early in the season. Dr. Jeff Dugas performed surgery in March and four days later Reeves was rehabbing his elbow and arm.

Today Reeves said the arm feels great and he is looking forward to the 2017 season, and is thankful of the opportunity Jefferson Davis Community College has given him.

“Coach (Darrell) Blevins is a great coach,” said Reeves. “He is going to give me the best opportunity to go down there and get better. Their coach staff is really good and the facilities they have down there are some of the best you will find in the state. It’s just amazing.

“I’m just going to focus on one step at a time at Jeff Davis, and if the opportunity (to play beyond that) comes along, I’ll be happy to take it.”

Reeves not only has been a lead horse as a pitcher, but he has power in his bat and production as well. As a sophomore he had four home runs and last season hit two before his injury. There are several returning players from last year and the Trojans will field a strong lineup with 11 seniors.

“This team has been playing together since rec league,” said Reeves. “We’ve all known each other and have all played together. It’s just amazing to have that connection on the field, and I think with the group of seniors we have coming back the leadership quality is going to be pretty good.”

Reeves was appreciative of the coaching he has received and thankful of the opportunity he is receiving from Jefferson Davis, through the communication of Coach Shannon and Coach Blevins.

“Coach (Derrick) Irons was instrumental in helping me grow up as a player,” said Reeves. “I’m still pretty young, and I’ll turn 18 after I graduate, and Coach Irons really helped me mature mentally on the field. Coach (William) Teal was great on and off the field, and he helped me continue to grow. Coach Shannon really knows baseball and I know he will be the same way. He really helped me get this opportunity at Jeff Davis and I’m grateful for that.”

As a youngster Hunter would not only watch the success of his talented older brother Harrison, but the two would work together, with the assistance of their father Alan.

“Coming up my brother was a good player too,” said Reeves. “He also was smart enough and he got a job as an engineer. He loved baseball but becoming an engineer was the path he wanted to take. Baseball has never left him. He’s taught me how to play first base and how to pitch. My dad has been in the the field ever since I was able to pick up a bat. That’s something you can’t replace.”

Coach Shannon is encouraged by the talent he has seen thus far in fall workouts, and knows Reeves will be one of his proven leaders.

“Hunter’s the type of young man that every father would be proud of,” said Coach Shannon. “When you find some kids like this, you are fortunate as a coach because he’s a great kid and obviously a good baseball player and his work ethic is off the chart. He will be one of those type of players that is also a coach in the dugout, because the kids are going to follow Hunter just because of his work ethic and demeanor. He’s going to be a guy that says this is how it’s done, get on board and let’s go.

“These seniors are going to be special. I’ve been at three high schools in my career, and this is the first time I’ve walked into a situation where it is a more polished situation. This year I’m going to just brush the dust off of them and let them play. I’m very excited about their commitment. As an example, last night we had eight of 11 seniors show up on last-minute notice to be volunteer bell ringers for the Salvation Army. I’ve been in a situation before where it was hard to get that commitment. You can go into a season or a ballgame and win or lose and you’ll be fine with this group because you know they are going to give you all the’ve got.”