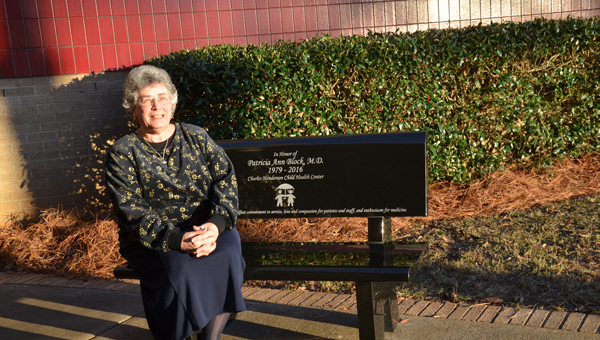 Dr. Patricia Block was honored with a retirement reception at Charles Henderson Child Health Center. Block has been a physician at CHCHC for 37 years. She will officially retire December 31, 2016. They named the primary care unit in her honor. Below, she stand with Troy Mayor Jason Reeves and Ben Busbee, CHCHC Executive Director.

Dr. Pat Block chose Brooks’ quote to show appreciation for the “great opportunity” she encountered in being a part of the concept of the Charles Henderson Child Health Center from its beginning in 1979 until her retirement at the month’s end.

The Charles Henderson Memorial Association Board of Directors and the staff of Charles Henderson Child Health Center celebrated the day with Block on the eve of her retirement after 37 years and six months of faithful and dedicated service to the community Thursday afternoon at the CHCHC.

Block expressed appreciation for the great opportunity to serve Troy, Pike County and the surrounding area for her entire medical career.

“I am humbled and appreciative to have been here from the ground up,” Block said. “But, for a while, it seemed like I was not wanted.”

Block was completing her residency and was interested in coming to Troy to practice, but the Charles Henderson Child Center was just a concept and a fulltime physician was not in the plans.

However, plans changed and Block came on board to be the pediatrician of note when the doors of the Charles Henderson Child Health Center opened in January 1981.

“In the beginning, it was chaotic,” Block said. “There were only four of us and we had no idea that this facility would grow and expand the way it has. I owe a great debt of gratitude to all of those who have made it possible.”
Troy Mayor Jason A. Reeves said Block has demonstrated an unwavering commitment to improving the overall health and well being of young children and to building better futures for the children in Troy and surrounding communities.

“The board of directors of the Charles Henderson Memorial Association in honoring Dr. Block, authorize the naming of the Primary Care Clinic of CHCHC as the Dr. Pat Block Primary Care Clinic,” Reeves said. “We could not be more proud.”

Jimmy Ramage, board chair, said the CHCHC has come a long way and expressed appreciation for the groundwork that was laid by Block.

A bench was placed on the grounds in honor of Block who will officially retire on December 31, 2016.

The inscription reads: In honor of Patricia Ann Block, M.D., Charles Henderson Child Health Center – We thank you for your many years of steadfast commitment to service, love and compassion for patients, staff and enthusiasm for medicine.

“She has been the first experience and exposure to the medical world to literally generations of families,” Busbee said.  “She has been the face of Charles Henderson Child Health Center for 37 years.  She is truly loved by the staff and her patients and parents/guardians.  She will be greatly missed and we wish her many years of joy and happiness as she enters this next phase of her life.”