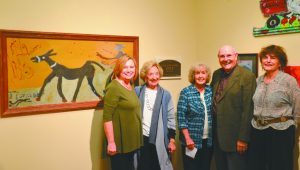 Mack and Mary Gibson surprised We Piddle Around Theater founder Jaine Treadwell on Tuesday with a painting that she and the theater had been after for years.The couple lured Treadwell into the Johnson Center for the Arts with a fake news story assignment, only for Treadwell to find out she was the subject of this story, not it’s writer. Pictured above, from left to right, are JCA Executive Director Vickie Pritchett, Mary Gibson, Jaine Treadwell, Mack Gibson and JCA Development Coordinator Wiley White. Below, Treadwell gives Mack Gibson a grateful hug.

When Messenger reporter Jaine Treadwell walked into the Johnson Center for the Arts (JCA) on Tuesday, she thought she was there to cover a story. Little did she know that art patrons Mack and Mary Gibson were actually there to surprise her with a special piece of art.

The Gibsons, along with JCA Executive Director Vickie Pritchett and Development Coordinator Wiley White , led Treadwell into the small gallery off to the side of the main gallery, where a painting by Charlie Inman hung on the wall. We Piddle Around Theater, founded by Treadwell and the Brundidge Historical Society, has used the painting as a logo for years.

“We kept coming back to that painting and decided on the slogan “Everybody’s got a tale [tail],” Treadwell said.

“We’ve loved it all these years and we tried so hard to afford it, but it’s an opportunity we just didn’t have.”

This year, Treadwell was concerned about losing the use of the painting due to a potential buyer. But that sale fell through and the Gibsons made the decision to purchase the painting and donate it to its home at We Piddle Around.

“Jaine has always been there for the arts,” Mack Gibson said. “She can take a pile of words and make you sound like a literary genius. We wanted to buy this to say thank you. Everybody doesn’t get told thank you for what they do.”

Treadwell broke into a big smile when everyone told her what was going on and gave hugs all around.

Pritchett said that the Gibsons’ gift shows that they not only support the arts in Troy, but in all of Pike County.

The toughest challenge left for Treadwell is to find a prominent place to hang it.