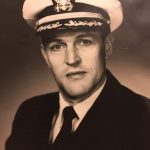 Louis Hopper Jr., a longtime resident of Enterprise died on Veteran’s Day,  Friday, November 11, 2016 in Troy. Louis was born in Paterson , New Jersey. After finishing school at Pompton Lakes High school in 1940 he enlisted in the United States Navy in the V5 program in aviation. Upon completion of flight preparatory school at Colgate University he attended War Training Service followed by completion of flight preparatory school at Chapel Hill North Carolina. On November 7, 1944 he received the gold bars signifying Ensign and the Gold Wings of a Coast Guard Aviator. After stops at Elizabeth City , NC., Kodiak, Alaska, Traverse City, Michigan he wound up at Ellyson Field, Pensacola for helicopter qualification , a prestigious course that was very difficult to get in. He then spent the next few years flying seaplanes and helicopters doing search and rescue on an ocean station half way between Hawaii and Japan, and then at CONUS in Brooklyn, New York. In June of 1964 he was assigned to the 12th Coast Guard District, San Francisco as Chief of Intelligence and Law Enforcement Officer. In May the following Year CDR Hopper retired after approximately 23 years of service. Louis then became a helicopter instructor at Ft. Rucker focusing on instrument training of Army and Allied aviators until  the age of 78. At that time he was the oldest pilot in the United States flying active duty military aircraft. At the age of 43 he started college at Enterprise State Community College and received his BS in Finance and Business Administration and a Masters Degree in Personnel Counseling from Troy State University.

A memorial service will be held Friday, December 16, 2016 at 2:00 PM at Green Hills Funeral Home with Reverend Steve Winton officiating. Visitation will also be Friday from 1:00 until 2:00 at the funeral home.

In lieu of flowers memorials should be made to the Louis Hopper Jr. Scholarship Fund at Troy University.