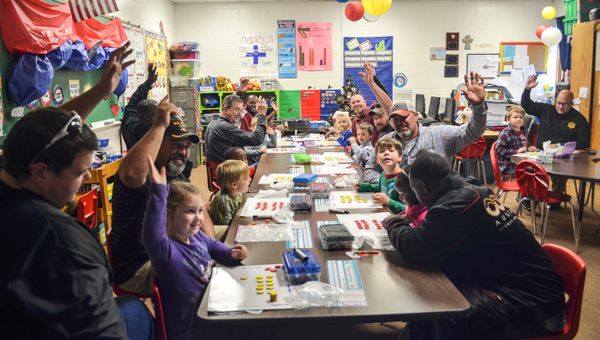 Banks School hosted “Dads Do Math Day” Thursday with more than 80 “dads’” participating. The event was designed to involve dads more in their children’s education and to provide them with an opportunity to learn more about the way math is being taught.

Banks Primary School hosted a “Dads Do Math” event and more than 80 dads, granddads, uncles and other male figures in the community participated.

“The idea for ‘Dads Do Math’ was to give dads an opportunity to be more involved in their children’s education,” said Lee Scott, principal. “We want the dads to know that they are always welcome at Banks. We want the dads to be more visible and the students were so excited to have them here.”

The dads were asked to bring a coffee mug and the school supplied the coffee.

“It was a very informal event and I think the dads appreciated the opportunity to learn more about the way that math is being taught and why,” Scott said. “Many of them visited the Book Fair with their children. Hopefully, this will increased the dads’ participation in all of our school events. The children love having them here.”

Scott said members of the community, including deputies from the Pike County Sheriff’s Department, participated in support of the children whose dads were unable to attend.

The Rev. Herb Reynolds of Brundidge said he appreciated the opportunity to sit with some of the children whose dads were in not in attendance.

Wiley Brantley said spending time with his daughter, Isabella, at school was a good way for him to be more involved.

“It’s important for us dads to be involved in our children’s education,” he said.

“I think the participation at ‘Dads Do Math’ shows that we are involved. We had a great time and appreciated to chance to ‘do math.’”