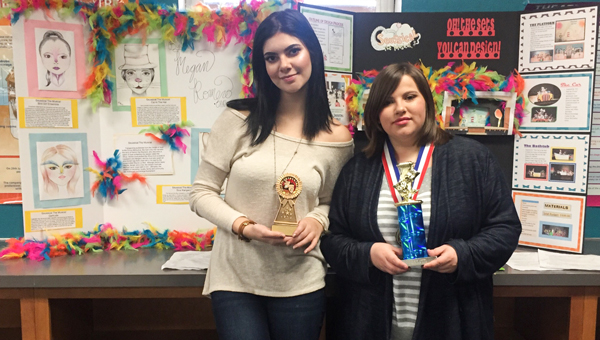 Megan Romero, left, and Malory Magrath took home honors at the Walter Trumbauer Theater Festival over the weekend. They competed against 1,300 students from around the state.

The Charles Henderson High School Theater Department competed at the Walter Trumbauer Theater Festival in Florence over the weekend. The students competed against 1,300 students from around the state, as far north as Huntsville and as far south as Mobile.

“We took 17 students and all of them had very good scores,” said Judith Park, theater teacher. “Only the top three in each category received medals but they all did an excellent job.”

Park said Magrath, a junior and first-time competitor, only got involved in play production in the spring of 2016.

“Malory approached me and said she was interest in set design,” Park said. “She drew elaborate scenes for the play, ‘Seussical the Musical.’ We used the scenes she drew and helped build. Her scenery made the musical come to life.”

Magrath used photos of the scenes for “Seussical the Musical” for the competition and brought home first place for her efforts. She will have an opportunity to compete in the Trumbauer Theater Festival again next year. Romero is a senior at CHHS. She won second place in the Trumbauer Varsity Makeup Design competition for the second year in a row.

“Megan has taken theater classes for several years and helps with makeup for all our productions,” Park said. “She wants to pursue a makeup design degree in college. She is also interested in modeling.”

“Again, all the CHHS students did an excellent job at the Trumbauer Theater Festival,” Park said. “Performing at this level is extremely competitive. Troy City Schools were very well represented.”