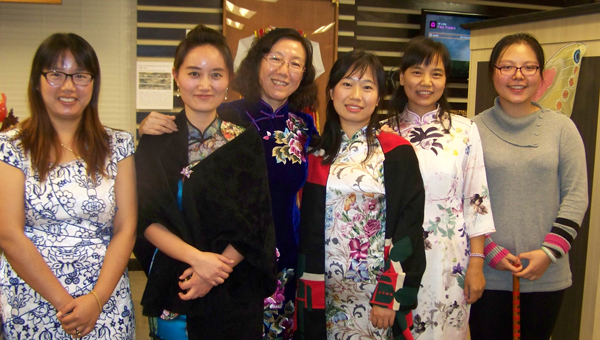 Representatives of the Confucius Institute were among the speakers and guest performers at the recent meeting ot the Troy Music Study Club. They included, from left, Wenjuan Cheng (Gloria), Lili Hu (Sara), Lin Cao, Wanjun Lu, Zhihong An and Yuying Zeng.

The Troy Music Study Club held its November meeting in the beautiful facilities of the Confucius Institute at Troy University on November 28, 2016.  John and Lyndia Dew and Amanda Ford were hosts for the meeting.

The opening session of the meeting included the club Collect and Federation Hymn, the song of the month, “Joyful, Joyful, We Adore Thee,” music by Ludwig van Beethoven and text by Henry Van Dyke.  The hymn was introduced by Joyce Dix then sung by club members under the direction of William Denison and accompanied by Dovie Cutchen.

June Kendrick, coordinator of the program, introduced Linda Cao of the Confucius Institute who gave a welcome and introduced the presenters and performers on the program.  Sarah Hu gave a presentation of music in China and Chinese musical instruments by using beautiful scenes and musical excerpts.  Included was a history of the various provinces in China, and the club listened to styles of music from the provinces.  Linda Cao read two Chinese poems, in Chinese aand in English.  They were “The Mid-Autumn Festival” by Su Shi and “Lin Jiang Xian” by Yang Shen.   Julia Zeng played “He Feng Yue” by Quan Feng Cheng on a bamboo flute.  Wenjuan Cheng gave handmade bracelets she had made to the members of the club.

The music club members were taken on a tour of the Confucius Institute Exhibit Hall, in which many beautiful items, including folk instruments, were displayed.  Refreshments were then served by the club, and the members of the Troy Music Study Club expressed appreciation to the Confucius Institute personnel for the program of the evening and for their hospitality.