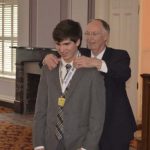 You can forgive Brock Huner if his train of thought goes back to the football season that has just ended, while he is currently focusing on the current basketball season, while looking ahead to baseball.

In a day and time of specialized, single-sport high school athletes, Huner is a throwback to the days his dad and grandfather played multiple sports.

For the Charles Henderson High sophomore, he would not want it any other way.

Huner’s work ethic, academics, community involvement and love of sports are some of the reasons he has been named the Alabama Sports Foundation 2016 Male Athlete of the Year, earning a meeting with Governor Robert Bentley on Wednesday to receive his honor.

“I was really surprised, but I’ve had a good summer with baseball, and it was a good experience,” Huner said. “Staying busy with sports gives me a lot of discipline, because my summer baseball coach was Sammy Frichter, and he teaches a lot about life. I just take his examples and put them into how I live my life, and I think that’s a lot of what this award is about.”

The honor is presented on behalf of the Alabama Sports Foundation, which hosts the Alabama State Games each summer.

Huner has participated in the Alabama States Games the past two years, and his baseball teams won the state championships both years. For the 2016 Alabama State Games tournament, Huner was 7 for 13 (.538) at the plate with five RBI’s including a walk-off double scoring the final two runs in bottom of the eighth inning vs. Luverne in an extra-inning game during the semi-final round.

In recent years Huner participated in the AAU 17U Baseball National Championship in Sarasota, Fla., and the inaugural Dixie Boys 15U World Series Championship, finishing the summer with a 6-0 record on the mound. He pitched in 10 games completing 40.33 innings of work with a team-low ERA of 0.69. At the plate Huner batted .394 with 23 RBI’s.

CHHS Principal Brock Kelly is proud of the accomplishments of Huner, and proud of the example he sets for other CHHS students.

“It’s not surprising to me, as Brock is a high-character guy, who carries himself with integrity on and off the field,” said Kelly. “It’s nice to have students that are high-character guys represent your school, as he does. When students come in they have the mind-set of being an athlete, and we hope to not only prepare students for the field, but we also want to prepare them for after high school, for their career. We want them to be successful no matter where they go on to play college ball or go into a career field.

“He’s definitely a leader, in the classroom, as well as on and off the field. He comes from a great family that I have come to know really well. You expect great things from Brock. This is just one of those things he has accomplished. I do not think this will be the last medal on his shirt.”