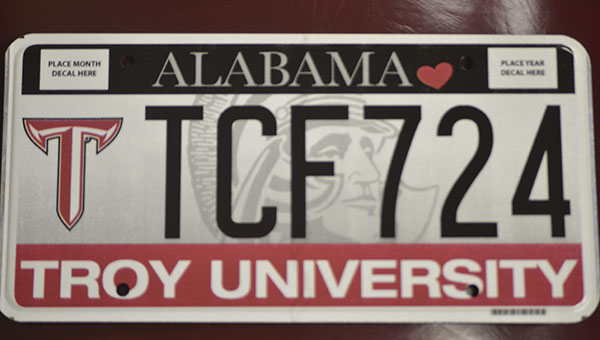 “This was very much a team effort,” Givhan said. “The state law says that we have to redesign the tag every five years. It’s a good thing, because it gives a chance to refresh what we’re doing and get everyone engaged in what we want to get out there and refresh what our tag looks like.”

Givhan said the team went through many different ideas before settling on the new iteration of the tag. He explained how feedback factored into some of the design choices that can be seen on the new tag.

“We know that the Power T has become more prominent, so it’s a chance to really reinforce that image and brand that goes with Troy,” Givhan said. “That’s the new part, but you can still see the Trojan warrior ‘Hector’ in the background. Another piece of feedback we got was how the old plate could only have 5 digits, so we designed this plate to have 6 digits, which gives more options for personalization.”

In addition to the new design, Givhan talked about how the money sent on the tags goes to help students.

“The big thing about this is– think about what were doing with the money that comes to Troy as a result of the tag,” Givhan said. “For $50 additional for the tag, $47 goes back to the university to build a scholarship fund at a time when affordability is one of the biggest issues in higher education.”

Givhan said that he is proud of the team for designing the tag and for the supporters who buy the tag.

“I was really proud of the work that the team did from top to bottom to try to get this right and I think it will be really popular,” Givhan said. “I’m also proud that our Trojan supporters support the tag. We finished third in license plates sales in Alabama last year with 9,000 plates sold. The Trojan spirit is alive and well out there and you can see it while you’re out driving around.”

The tags will become available January 1, but cannot be traded for. Those wanting a Troy tag will have to wait until their plate is up for renewal to get the new tag.