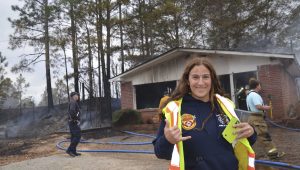 Joceline Tabacco’s cross-country foot journey depends entirely on the kindness and compassion of the strangers she meets along the way. On Monday, that journey brought her through Pike County, where the generosity of firefighters gave her a first-hand look at a brush fire. She said the journey is a walk of faith.

In November 14 years ago, Joceline Tabacco rolled her vehicle eight times. Volunteer firefighters pulled her out of the wreckage and kept her alive until she was loaded onto an air ambulance to be transported to a distant hospital.

Tabacco’s injuries were so severe that she had to learn to walk and talk again. The journey back was a long and difficult one. Medications caused her weight to balloon from 130 to 280 pounds.

Tabacco was alive but she wasn’t living.

“I asked God if He had a plan for my life, if there was a reason I was alive, to give me a sign,” Tabacco said. “I was in a fast food restaurant and a stranger came over and paid for my meal. That was my sign. God has just been waiting for me to ask. When I asked, he gave me the sign and that sign lifted me up. Something as simple as a random act of kindness by a stranger, brought me to my knees, then lifted me up and gave me a reason to live.”

Tabacco is now healthy and happy. She has a reason to live. She has a random act of kindness to pay forward.

So, Tabacco quit her job in special education in California, gave away her “stuff” and began a year-long foot journey that depends entirely on random acts of kindness.

“Princess Diana had it right,” Tabacco said.  “She said we should each carry out random acts of kindness with no expectations of rewards, safe in the knowledge that one day someone might do the same for us.”

Tabacco began her walk in Fort Wayne, Indiana, on August 23, and will walk the final mile somewhere on the East Coast on August 23, 2017.

She had not planned to walk though Alabama, but God had other plans.

Tabacco’s alternate path took her through Hanceville where a farmer gave her a lift and other kind motorists got her to Troy.

“God shows me the way and He brought me here for a reason,” Tabacco said. “A part of that reason was to visit with the firefighters here. These are the guys who pay it forward every day.

“Firefighters put their lives on the line every day,” she said. “When my life was drifting away, they were the ones who saved me. They are my heroes.”

When the fire alarm sounded at the Troy Fire Station, Tabacco was invited to “ride the truck” to a fire near Brundidge.

“It was a brush fire that came very close to a house,” she said. “The house could have been destroyed if it had not been for the different fire departments working together. I have so much respect for these guys.”

The Troy firefighters are among the many people who have shown kindness to Tabacco on her journey into life.

“People are basically kind,” she said. “Three months into my walk, I know that for sure. I have seen shown so many kindnesses and I want to pay each kindness forward.”

Tabacco’s ultimate goal is to create a nonprofit organization that spreads acts of kindness like wildfire.

“Mahatma Gandi said to give pleasure to a single heart by a single act is better than a thousand heads bowing in prayer,” she said. “On my one-year USA walk to practice and promote random acts on kindness, I also want to share my healing journey and what I have learned about becoming the best version of ourselves.”