Every Red Kettle Campaign is special because the money collected is used to fund programs and services for friends and neighbors in need.

This year’s Red Kettle Campaign is extra special because it is being dedicated to the memory of Kenny May who was a main-stay in the campaign for years. 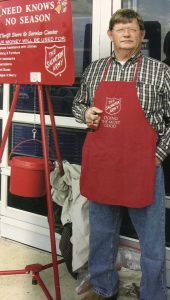 “Kenny was the most dedicated volunteer we had,” said Donna McLaney, Red-Kettle coordinator. “Whatever we needed done, Kenny did it. Whether it was ringing the bell at a kettle or going around picking up the donations, Kenny was always willing. He is greatly missed, not just because of his volunteer efforts, but because he was Kenny.”

May died in September 2016. He was well-known and greatly appreciated for his volunteer support of the Pike County Salvation Army, which is directed by his wife, Kim May.

“Kenny was always upbeat and positive,” May said. “When I got discouraged, he was always there to pick my spirits up. He was a part of everything we do at the Salvation Army. If it had to be done, Kenny did it. We miss him in so many ways but especially at Christmastime. He loved Christmas and he loved doing for others.  Every time he picked up the kettle donations, he was excited because those donations were going to help people right here at home.”

May said hopes are that this year’s kettle campaign will be even more successful than last year’s.

“We always have a lot of people in need, especially at this time of the year,” she said. “Some people that are living on fixed incomes have to decide whether to pay their utility bills or have their prescriptions refilled. It shouldn’t be that way and the Salvation Army is here to help.”

May said other needs include food, clothing, rent and different emergency situations.

Those who seek assistance from the Salvation Army must make application to determine if they qualify.

“Home fires are an increased threat during the winter months,” May said. “We also have requests for travel assistance when people are trying to get home during the holiday season.

“The Red Kettle Campaign is our largest fundraiser and all of the funds raised stay at home to assist people in our community.’

Bell ringers are needed for the 2016 Red Kettle Campaign. The bells are rung daily from 9 a.m. until 5 p.m. at Walgreen’s, Food World, Walmart and Piggly Wiggly 231 in Troy.

The Brundidge Rotary Club rings at the Piggly Wiggly Brundidge.

Groups may volunteer for an entire day, a morning or afternoon or on an individual basis. Individuals are encouraged to volunteer for a two-hour block of time.