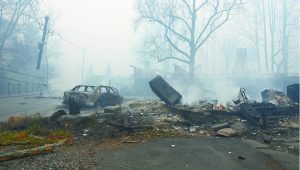 A structure and vehicle are damaged from the wildfires around Gatlinburg, Tenn., on Tuesday, Nov. 29, 2016. Rain had begun to fall in some areas, but experts predicted it would not be enough to end the relentless drought that has spread across several Southern states and provided fuel for fires now burning for weeks in states including Tennessee, Georgia and North Carolina. (Michael Patrick/Knoxville News Sentinel via AP)

Almost exactly five years ago, Charles Adams watched as his stained glass studio south of Troy burned to the ground. Tuesday, his friend, Bob Dunwoody stood in anguish at the sight of the raging fires in Gatlinburg, Tennessee. He feared that his store on Glades Road had been engulfed by the wildfires of the mountain area of the Volunteer State.

“I talked to Bob this morning. His house was not threatened but he didn’t have much hope for his store,” Adams said. “He can’t get in there to see but he’s pretty sure the store burned.”

What began as a three-acre fire a few days ago was fanned by high winds Monday, sending fire and embers toward the resort town of Gatlinburg. Tuesday, more than 14 fires were burning in the area around the mountain resort town.

Adams has participated in the Craftsman’s Fair at the Civic Center in downtown Gatlinburg each October and July since the early 1970s. He has many friends in the area.

For more than 30 years, he and his wife, Mary, rented a cabin just off Cherokee Orchard Road and a rock’s throw from the home of Boudleaux and Felice Bryant, who wrote the popular mountain song, “Rocky Top.”

“From what I know, the cabin has not burned but the Park Vista, which is just up the mountain is gone,” Adams said. “We could stand on the porch and see that huge hotel. The Alamo Steak House, the ACE Hardware …. Gatlinburg … it’s gone.”

“I’m afraid they have been burned out,” he said.

Adams has a longtime friend whose family was displaced when the Smoky National Park was established.

“Martha’s family had a small farm way back in the mountains,” Adams said. “To make way for the park, they had to walk away from the mountain way of life they loved. Martha has a condo that overlooks the Great Smoky Mountains. She said she would always have that incredible view because the park was protected. But it was not protected from fire.

“I just don’t know how Gatlinburg can recover from this. It’s such a popular tourist destination. This fire is going to have a devastating effect on the town and its people for a long time.”

Adams, like so many who have visited Gatlinburg, has fond memories of the way it was and the way it will never be again.

“But, we were just visitors there,” he said. “So many have lost so much. I feel today like I felt five years ago. Just heartsick at the loss.”

Just a week ago, Lauren Chandler was zip lining in Gatlinburg and in awe of the beauty all around her.

Today, much of the scenery that she was enjoying that day is little more than charred trees and blackened earth.

“We stayed at a resort right behind Dollywood,” Chandler said. “We went past Dollywood and on up a one-way road to our cabin. When you stay in a cabin, you naturally take more things, so at the top of the rental policy was ‘Do Not Burn.’”

Because of the drought conditions, tourists were being reminded constantly of the dangers of fire.

“When I was growing up, I went to Gatlinburg often with my grandparents,” Chandler said. “It is a special place filled with memories.”

Chandler’s recent trip to the mountains was a memory-maker with trips to the Dixie Stampede, The Comedy Barn and hiking, zip lining and walking around downtown Gatlinburg.”
“I love being in Gatlinburg,” Chandler said. “It’s very busy and there’s so much to do.”

When Chandler learned of the fires in Gatlinburg and saw the devastation on television, she was saddened for the 3,600 permanent residents of the small town, those who have businesses there and all of those who visit the Smoky Mountain National Park.

“I hate it for everybody who lives there and works there,” she said. “Tourism is big business and the fire will have a tremendous negative impact. Already people are cancelling their reservations because of the fires and the loss of the beauty of the mountains.
Chandler said the Gatlinburg area will be scarred for a long time. The devastating impact of the fires will be felt for years.

“The trees are resilient and they will grow back, but it will be a long time before the hotels, restaurants and other businesses will be back. I hope the owners have enough insurance money to build back. Gatlinburg won’t be back the way it was, but I think it will be back.